The Community Service Interclub Council collected over $5,000 in monetary donations and $1,000 worth of non-perishable items for the Trenton Area Soup Kitchen in the Council’s second annual Trick-or-Feed during Princetoween. 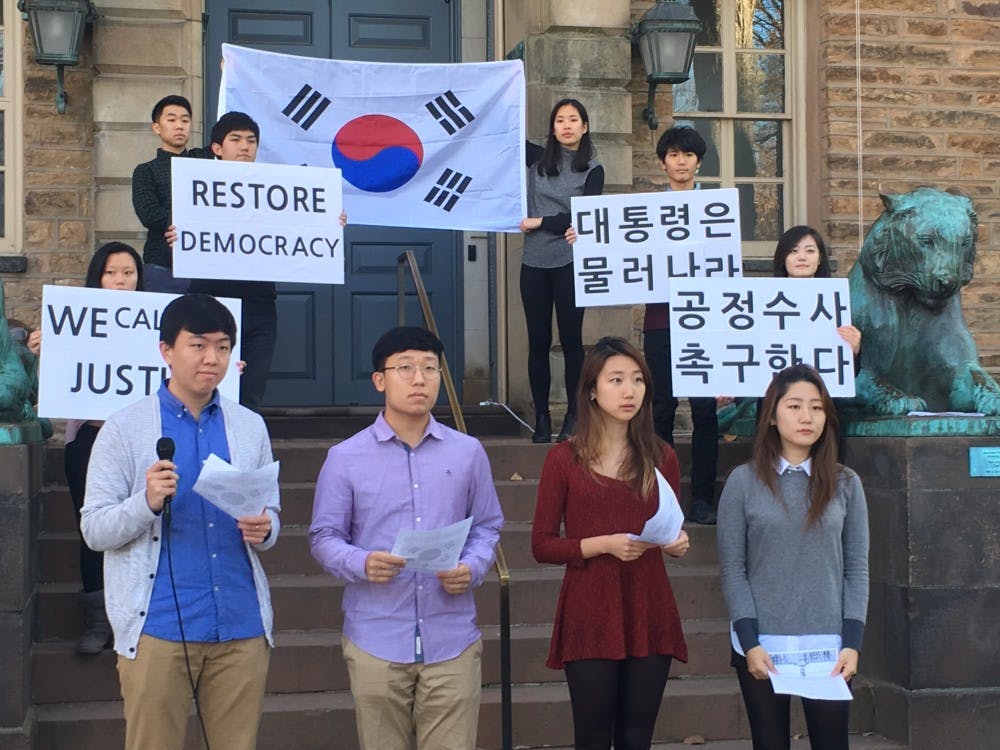 A group of University students held a demonstration addressing the recent, ongoing political scandal concerning the South Korean president in front of Nassau Hall at 2 p.m. The demonstration was conceived by four Korean students concerned with the current situation in Korea: Sejin Park ’18, Wonshik Shin ’19, Rachel Lim ’18, and Sally Hahn ’19.

U. community members protest to call for U. action protecting undocumented immigrants 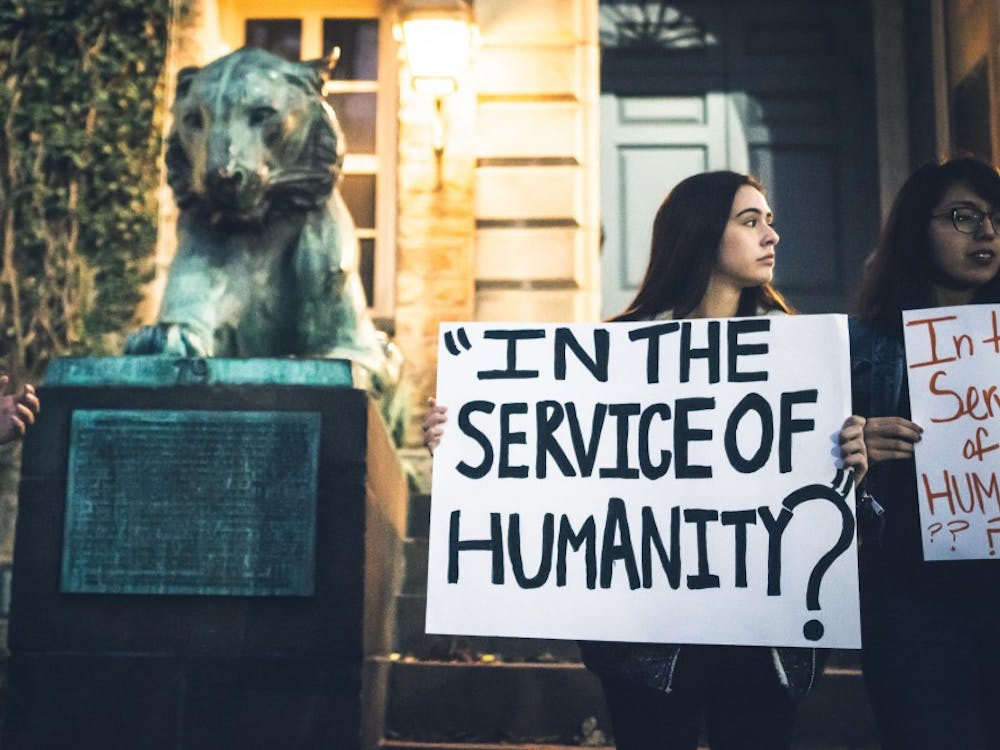 U. community members protest to call for U. action protecting undocumented immigrants 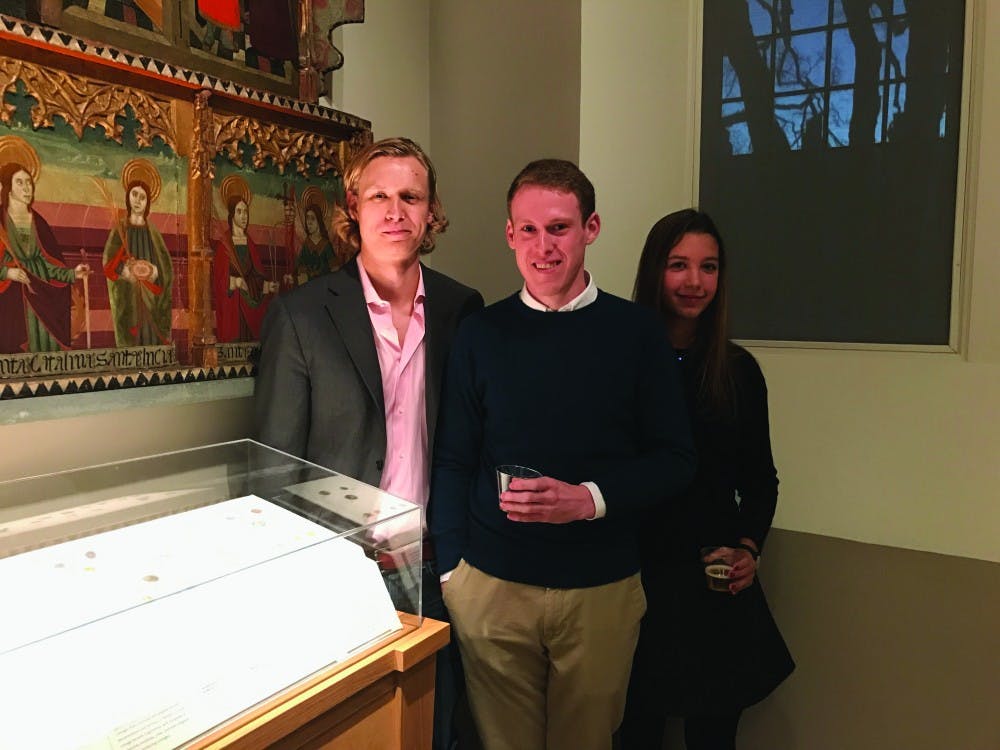 Members of the Princeton University Art Museum Student Advisory Board opened a permanent collection of ancient and medieval coins at the museum.

U. Students issue petition in call to action to protect undocumented students

U. Students issue petition in call to action to protect undocumented students

The DREAM Team, an immigrant rights advocacy group on campus, issued an online petition on Monday in support of undocumented students on campus. The “Call to Action to Protect Undocumented Students at Princeton” asks signatories for their name – either individual or organization – class year, and if that individual is a student, a faculty member, or a staff member.

“Ni Hao pretty,” “you’re pretty for an Asian,” and “you’re the whitest Asian ever” are among the verbatim comments received by female Asian-American students in the University that will be displayed around campus later this week as a part of a poster campaign. According to Alis Yoo ’19, facilitator of the “Asian girls everywhere” poster campaign sponsored by the Asian American Students Association, the sixteen different samples of posters to be displayed around campus in the next few days represent the authentic experiences of University students in and outside of the classroom.

Over 70 members of the University community, including students, faculty and staff, gathered on Friday morning to protest the election of Donald Trump. Julian Perez ’17, co-president of the Princeton University Latinx Perspectives Organization, said the demonstrators were there to stand against the values that Trump and his supporters prescribe to. He acknowledged that hateful sentiments and hostile actions are not new for marginalized groups, but that the protest was organized to show that these groups are united and will not back down given Trump’s presidential victory. “It’s another reminder that we have a lot of work to do, and that we have to fight.

Ramzie Fathy ’20 spent his first fall break in Dearborn, a suburb of Detroit, to learn about the refugee experience firsthand. 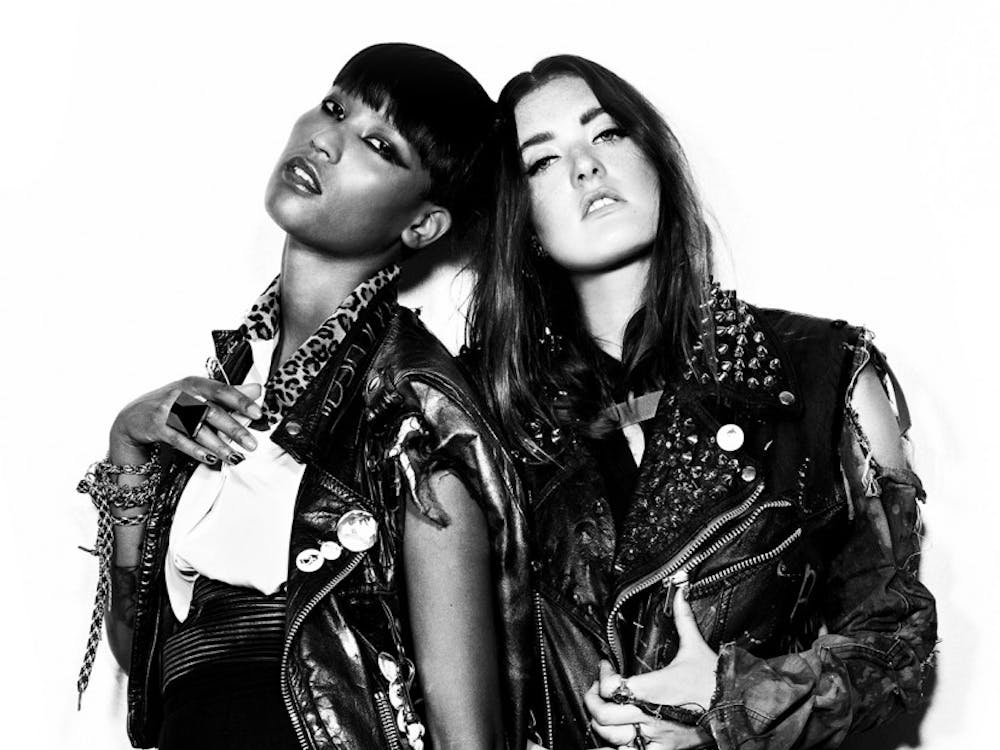 “The proper scope of a university, in one soundbite, is to prepare citizens for a free society.

Pride Alliance to celebrate Pride Month with a variety of events

Pride Alliance to celebrate Pride Month with a variety of events

Since the Pride Week at the University expanded to Pride Month last year, the number of activities offered and number of participants during the month has grown. This year, the Lesbian, Gay, Bisexual, and Transgender Center and the Pride Alliance are organizing 16 events in April, according to Jean Bellamy '19 and Nicolas Freeman '18, co-presidents of the Pride Alliance board. Pride Alliance is a group that representsthe interests of the LGBT and questioning members of the University community.Andy Cofino, the Center's program coordinator, explainedthe LGBT Center advises, supports and checks in with the program every week, though the group is very student-run. This year’s Pride Month has many more events, as well as considerably larger expenditures and bigger ticket items, according to Freeman. “We want to reach out more to the Princeton campus,” they said. The events include workshops from writer Sinclair Sexsmith on gender, sexuality and trigger warnings, speed-friending and karaoke, film screenings, art exhibits, lectures and cupcake decorating with the Princeton Aces, a group for asexual and questioning students, according to Freeman. For most events, attendance typically ranges from 40 to 70 people, with heavier attendance for the ticketed events like karaoke, Bellamy said. Pride Month events kicked off with the “We Are Here” Queer monologues in Wilson College Blackbox Theater April 1 and 2. “I always think the Queer monologues are very impactful and are able to bring the community together,” Cofino said.

The Princeton Police Department launched an investigation into allegations that the security officers at Tiger Inn engaged in “ongoing inappropriate sexual behavior,” according to a police report obtained by The Daily Princetonian on Dec.

The Princeton Police Department’s investigation into the Tiger Inn sex photo scandal was ultimately closed because neither student depicted in the photo wished to pursue the matter, according to a copy of the investigation report obtained by The Daily Princetonian through the New Jersey Open Public Records Act. The report, which was finalized after the case was closed on Dec. 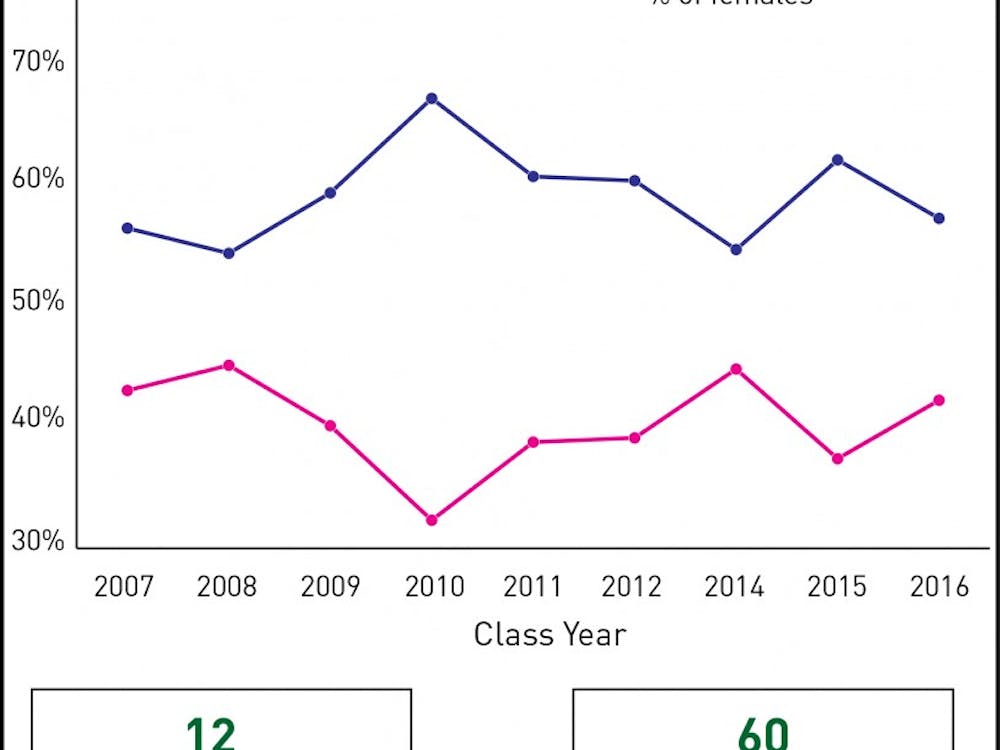 Tiger Inn's recent decision to fire two of its officers after they sent emails that were found to be disrespectful to women has reignited concerns about gender equality at the eating club that was once the last bastion of male-only membership. One of the emails included a picture of a female student performing oral sex on a male student, while a second email encouraged the membership to jeer Sally Frank ’80 — whose activism ultimately forced TI to accept women — at a recent lecture on campus. The club's graduate board has pledged to revise bicker and initiations, have more female undergraduate officers, create a co-ed bicker committee and include women in its graduate board. Former vice president Adam Krop ’15 and former treasurer Andrew Hoffenberg ’15 were fired last week, The New York Times reported. They will be moving out of their clubhouse dormitories, said Eric Pedersen ’82, a member of the TI graduate board.

Tiger Inn has removed two undergraduate officers – its vice president and treasurer – following the distribution of an email containing a sexually explicit photo, and a separate email that seemed to mock activist Sally Frank ’80, whose lawsuit forced TI to accept women as members in the early 1990s. The number of ousted TI officers now totals six this year, after four officers were forced to resign earlier this year due to an unrelated incident in which the club allegedly hosted a party of the semi-secret drinking society known as the 21 Club. The first email, from mid-October, was sent by former vice president Adam Krop ’15, the New York Times reported. The email contained a photo of a woman engaged in a sex act at TI.

How are the USG elections going so far? 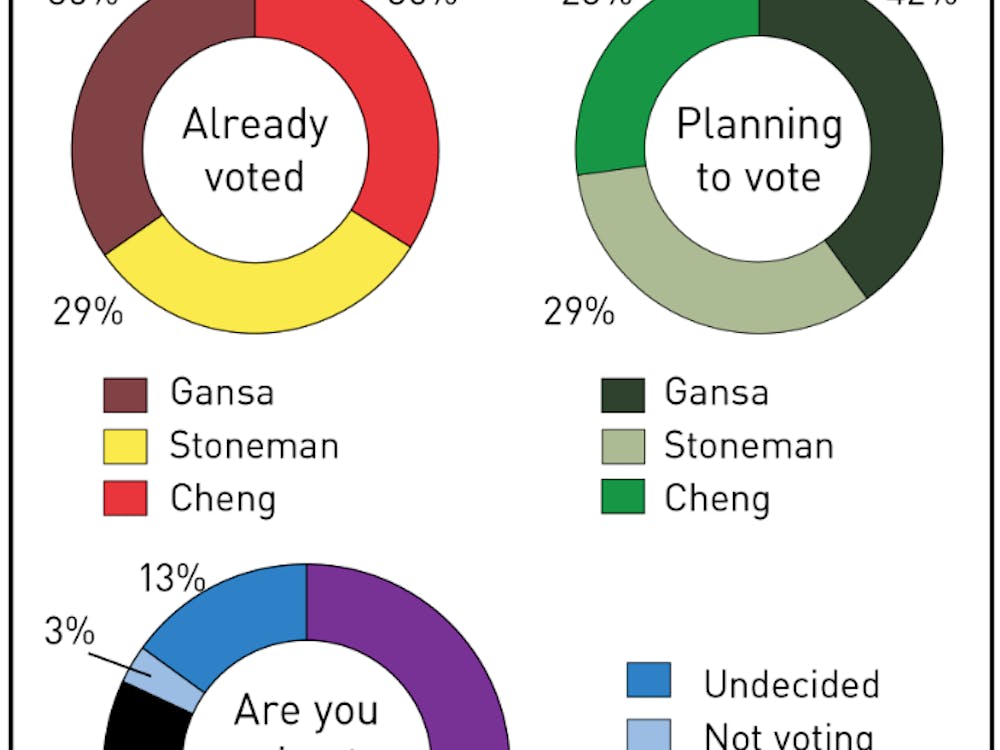 How are the USG elections going so far?

Editor’s note: The Daily Princetonian interviewed over 300 students on Monday to get a sense of how the student body is voting in the most recent Undergraduate Student Government Elections.

Members of the Undergraduate Student Government senate gathered for their weekly meeting this Sunday to address the opening of Mental Health Initiative Board applications and explore counter-Yik Yak initiatives. U-Councilor and chair of the Mental Health Initiative Board Zhan Okuda-Lim ’15 presented an update on the board, whose applications are due by 5 p.m.

The Black Ivy Coalition, a group consisting of members from all eight Ivy League Schools, published a statement in The Huffington Post late last month establishing a Collegiate Civil Rights Coalition. The statement, entitled "A Call to Action: Our Generation and the Evolution of the Civil Rights Era," was written and signed by two members from each Ivy League school for a total of 16 signatures. "We aim to correct the misconception that the Civil Rights movement is over and the United States exists in a paradigm of post-racism," the statement reads,calling for a new generation of black leaders to address today's racial issues."We can no longer expect for Rev.

Ban on importation of ivory to affect PUO Intersession tour 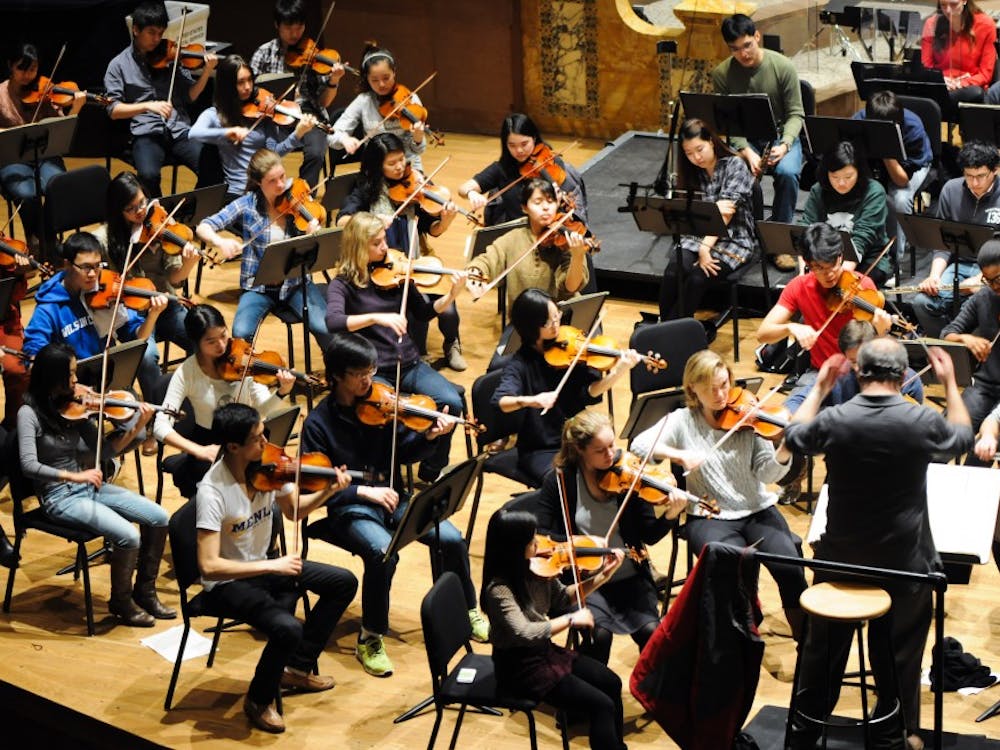 Ban on importation of ivory to affect PUO Intersession tour

Members of the Princeton University Orchestra will be affected by the recent ban on the import of ivory when they go on tour to Ireland over Intersession in 2015.