It was after class when I stepped out of the Scheide-Caldwell House and was confronted with the pumpkin. Seated in between the picturesque crossroads of Scheide-Caldwell, Chancellor Green and Henry House was this enormous sculpture of a gourd cloaked in black and brass-gold polka dots. Like some sort of magical occurrence, it appeared to have sprouted in a spot where I had most certainly had lunch just a few weeks before. Questions possessed me. Where did the pumpkin come from? Who had designed it? Was it a gesture to the harvest season, the time for hot apple ciders and feasts among relatives?

To answer these questions, I began with the pumpkin, but ended with a deeper investigation into the sculpture of Princeton’s campus. To start, I contacted James Steward, director of the University Art Museum.

“Our primary goals are to place art in the path of everyday life on campus; to continue enriching the visual environment of the campus; [and] to incorporate art in the context of the architecture and landscape of the campus,” Steward said in an email interview, also emphasizing a desire to acquire work from the best contemporary artists and juxtapose them with the work of past masters.

Incidentally, the pumpkin sculpture is the work of a contemporary master. After my initial encounter with the pumpkin, I found my first clue as to the artist’s identity from a website forwarded by a friend, who gave me the name of the artist: Yayoi Kusama. As you scroll down Kusama’s uber-modern home page, you can find the small icon of a pumpkin nearly identical to the one by Scheide-Caldwell. Fascinated, I searched further. When I found an article from “AnOther” titled “Yayoi Kusama’s Pumpkin Obsession” a massive image of the same style of pumpkin-art loaded before me. It was unmistakable — this was the pumpkin I sought.

Yayoi Kusama, as I learned, is an 86-year old artist, a preeminent Japanese artist and part of the avant-garde movement. According to the “AnOther” article, Kusama suffers from hallucinations and obsessions, and found that one of the ways to cope with them was through her art. The AnOther article quotes from her autobiography, in which she states, “I would confront the spirit of the pumpkin, forgetting everything else and concentrating my mind entirely on the form before me.”

One mystery was solved — and ironically, the pumpkin of my fascination happens to have been the coping mechanism for a brilliant artist’s illness. But how did this work of art find its way to Princeton?

According to Steward, Kusama’s “Pumpkin” is on a short-term loan from alumnus Bill Fisher ’79. A quick search on Forbes Magazine reveals that Fisher is one of the heirs of the Gap fortune and currently the managing partner for Manzanita Capital, a private equity firm based in the United Kingdom.

“[The pumpkin sculpture] was installed in early September, at a site chosen for the intimacy of its scale, the dynamic relationships with Joseph Henry House and the Scheide-Caldwell House, and the fact that it’s an area that doesn’t yet have a public art presence,” Steward said.

The pumpkin’s origin explained, I realized I had more questions about campus sculpture, especially in reference to the project in front of the Art Museum, its summer construction and progress obscured — like many things Princetonian — by a massive tent. As school resumed, it was unveiled, revealing six panels of stained glass that stand in front of the art museum like translucent dominoes. Designed by Mike and Doug Starn, Beacon, New York-based artists and identical twins — the sculpture will be on display for an indefinite period of time, unlike some of the more temporary exhibitions that have occupied the museum’s front lawn.

“We originally invited the Starns to campus to consider making something for another site, but they became fascinated by the site in front of the Art Museum,” Steward said. “We had been working on several commissioning ideas for the front of the Museum for a few years, and so the time was right.”

Like the pumpkin or many of the works of art on campus, the sculpture was intended to be experienced from a pedestrian perspective.

“The work has been described as ‘an outdoor chapel of glass’, through which viewers are invited to walk,” Steward said. “Part of its beauty, I think, is in its scale, and the way in which these heavy panels lean into and are propped by each other, but without obvious means of sufficient support.”

In creating the commission, the Starn brothers utilized a glass-dyeing technique developed in Germany, a process that Steward considered to be reflective of the typology of Princeton’s campus, recalling gothic architecture in front of a modernist-designed wing of the Art Museum.

While Kusama’s “Pumpkin” and the Starns’ work are new, I also found myself interested in Beverly Pepper’s “Thetis Circle,” the sculpture by Whitman College installed last fall.

“We sited this work near Whitman College because it, too, was an area largely lacking in public art — apart from the tapestries we recently commissioned for the dining hall,” Steward said.

Sandra Bermann, the Master of Whitman College and professor of comparative literature professor, said reception to the piece has been positive.

“I think people like it,” Bermann said. “I’ve heard a lot of people ask, ‘Well, what is that sculpture? It’s beautiful, or it’s surprising’ … It’s a beautiful place for a large sculpture.”

Dean of Whitman College Rebecca Graves-Bayazitoglu added that the juxtaposition of the modern with the neo-gothic style of Whitman provided an interesting balance.

“For me that’s the crucial thing, is that interplay between varied and contemporary statue and organic form and buildings that were built to look as though they had been built in the 1920s,” Graves-Bayazitoglu said.

The interplay between modern and traditional appeared again and again, from the discussion of the pumpkin to the stained glass to “Thetis Circle” — and it reminded me of the tension between Princeton’s campus as portrayed in the media and its modern, eclectic fabric of styles. Having recently re-watched the 2001 film “A Beautiful Mind,” concerning the life of the late John Nash GS ’50, I had observed that the filmmakers employed clever film angles and props to obscure some of the modern art on campus. This made me think — what does it mean to insert modern sculptures into an architectural landscape so cloaked in traditional forms?

“Context can be understood as resonance, but also as point and counterpoint,” Steward said. “Consider, for example, the Henry Moore near West College and Nassau Hall. The legacy of the campus informs us, not because new works of public art should look like what we inherit from the past, but perhaps because they can also magnify it.” 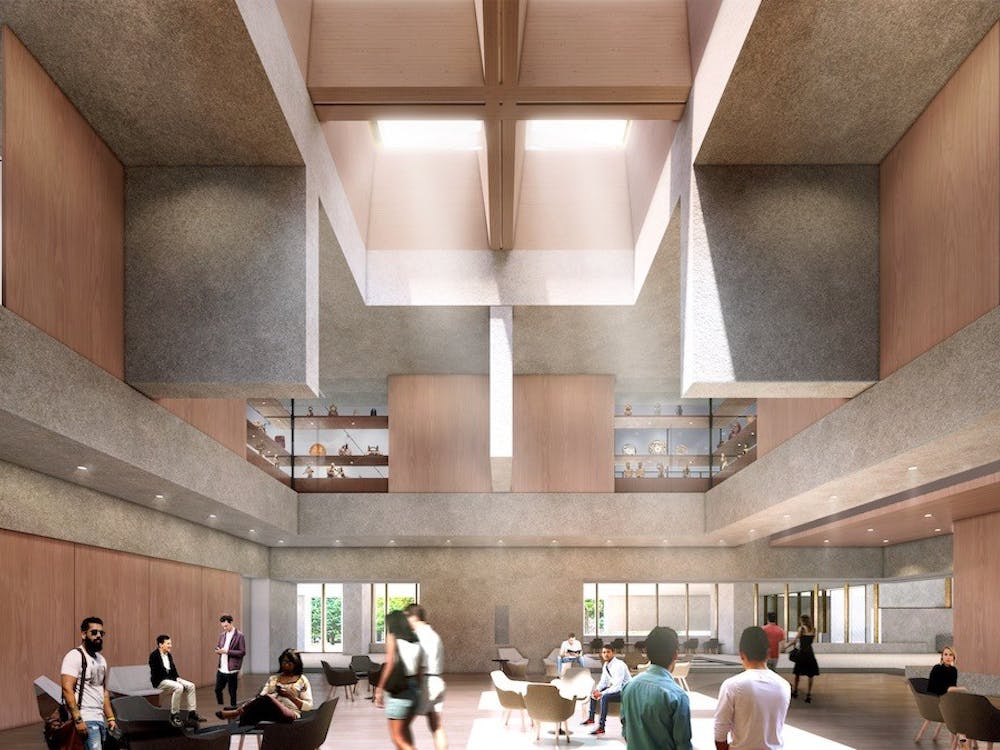 Princeton University Art Museum unveiled plans for its new building, designed by Sir David Adjaye. The new museum, which spans three floors and includes nine interlocked pavilions, will be built with stone, bronze, and glass, and can accommodate up to 2,000 people. The project will break ground in May 2021, with an expected completion date of 2024.

Princeton University Art Museum unveiled plans for its new building, designed by Sir David Adjaye. The new museum — which spans three floors and includes nine interlocked pavilions — will be built with stone, bronze, and glass, and can accommodate up to 2,000 people. 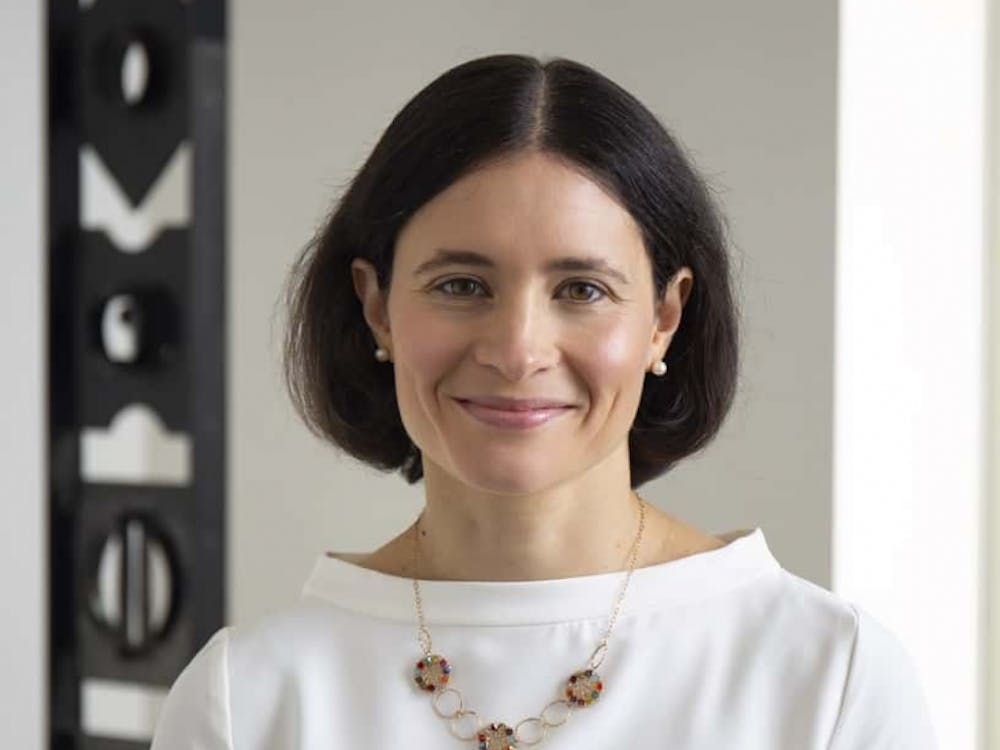 Juliana Ochs Dweck has been appointed to the newly created role of chief curator at the Princeton University Art Museum.