This past weekend, Princeton women’s volleyball traveled to New York to compete against Cornell and Columbia. Friday night, the Tigers walked off the court with another win, remaining undefeated in the league (4–0). In a three-set game, Princeton dominated the first (25–21) and second sets (25–20). While the Big Red returned to the court in the third set with an intensity that kept the score tied for most of the set, the Tigers ultimately won 34–32. Junior outside hitter Elena Montgomery led the team with 16 kills and 11 digs. Junior setter Lindsey Kelly also had an impressive 39 assists and seven digs.

The Tigers remain undefeated in the league after their three-set match against the Columbia Lions (25–14, 25–15, 26–24). Kelly led with 40 assists, and junior right side hitter Avery Luoma led with 14 kills and four blocks. The team is on a 10-game win streak with a strong 11–2 overall record. They will be hosting Yale on Friday, Oct. 15 for another league game.

On Saturday afternoon, the women’s soccer team lost 3–1 to Brown. Prior to the game, both teams were undefeated in the Ivy League. An early goal from the Bears in the first half gave them an advantage. The Tigers managed to hold them off for the remainder of the half. After two goals from the Bears in the second period, senior forward Gabi Juarez managed to slip one in off of a penalty kick. While Princeton’s defense prevented the Bears from scoring again, they were not able to close the gap. This is the team’s second loss of the season. They are now 9–2–1 overall and 2–1 in the league. They will be hosting Columbia on Saturday, Oct. 16 at Sherrerd Field.

The men’s soccer team remains undefeated in the Ivy League after their game against Brown on Saturday night. The Bears were the first to score, but the Tigers made sure that this would be their only goal. In the second period, Princeton returned to the field with an intensity that allowed it to not only tie the game, but also surpass the Bears in scoring. Goals from junior defender Lucas Gen, junior forward Daniel Diaz Bonilla, and senior midfielder/forward Kevin O’Toole led the team to a 3–1 victory. The Tigers are now 5–5 overall and 2–0 in the league. They will also be hosting Columbia on Saturday, Oct. 16 at Sherrerd Field.

The Princeton field hockey team added to its winning streak on Saturday with a 6–0 shutout against Dartmouth. The Tigers are now 6–5 overall and undefeated, 3–0, in the league. Junior midfielder Sammy Popper and junior striker Ali McCarthy added to the scoreboard with one goal each. First-year Beth Yeager, a defensive midfielder, dominated both ends of the field. Yeager leads the team, and even the league at large, in goals. The Tigers will be on the road for another league game on Friday, Oct. 15, facing Cornell.

The men’s tennis team finished their week in Tulsa, Okla. at the Intercollegiate Tennis Association Men’s All-American Championships this weekend, going 9–7 in singles and 2–3 in doubles across all days of play. Senior Karl Poling advanced to consolation semifinals against UVA’s Chris Roedesch for a strong finish Saturday, winning the first set 6–1 before Roedesch took the upper hand, clinching the match in 6–3 and 6–4 sets. The Tigers will head to Philadelphia on Thursday, Oct. 14 for the ITA Northeast Regional.

First-year Victoria Hu propelled the women’s tennis team through an excellent week of play in Charleston, S.C. at the ITA Women’s All-American Championships. Hu dominated the week, going 7–1 across eight days of play. She bested Pepperdine’s Victoria Flores in an outstanding match Sunday morning to clinch the Consolation Singles Title. Hu took the first set 6–2 and pushed through a demanding 7–5 second set to take the victory. The team went 7–3 overall across all days of singles play. The Tigers remain in Princeton for the ITA Northeast Super Regionals beginning this Friday, Oct. 15.

The Tigers came back from an eight-point deficit at halftime to win a close game against the Monmouth Hawks, 31–28. After Monmouth tied the game with less than three minutes left in the final quarter, Princeton had one shot left at regaining the lead. A crucial drive led by senior quarterback Cole Smith brought the team close enough for first-year kicker Jeffrey Sexton to knock it in from the 35-yard line with 10 seconds remaining in the game. The Tigers remain undefeated this fall and will face their second Ivy League opponent of the season, Brown, on Saturday, Oct. 16 in Providence, R.I. Check out our full recap here.

Saturday saw a marquee matchup for No. 24 Princeton football (3–0), as they traveled to West Long Branch, N.J., to take on No. 25 Monmouth (3–2). The Tigers surged past the Hawks in the fourth quarter to ultimately win 31–28. 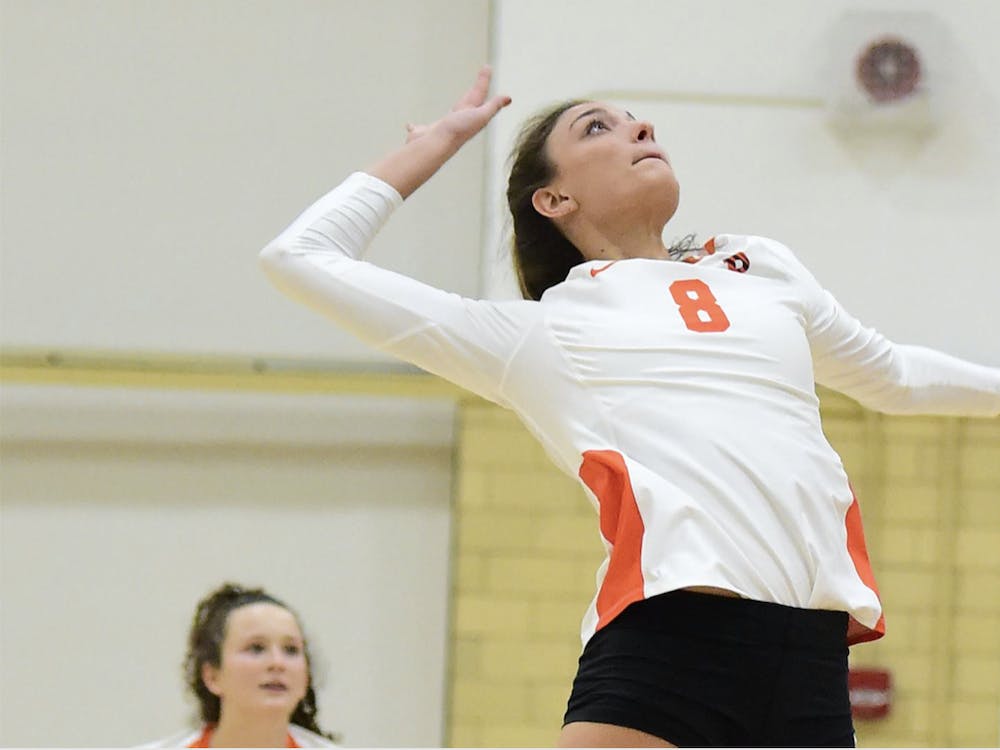 Princeton’s women’s volleyball team squared off against fellow Ivy League contender Harvard in an exciting five-set match that resulted in a Princeton victory.

Princeton’s women’s volleyball team squared off against fellow Ivy League contender Harvard in an exciting five-set match that resulted in a Princeton victory.