This fall, many of Princeton’s a cappella, dance, and other campus performing arts groups will not have auditions or accept new members.

While September is typically a peak recruitment window for these groups, featuring performances, open houses, auditions, and callbacks, the virtual 2020–21 academic year made this typical process impossible. All 15 dance groups under the Performing Arts Council (PAC), as well as the eight a cappella groups of “acaprez,” have decided to cancel fall auditions.

Under a large banner that reads “JOIN THE TONES,” the website of all-male a cappella group the Princeton Tigertones adds: “Well, not right now.” 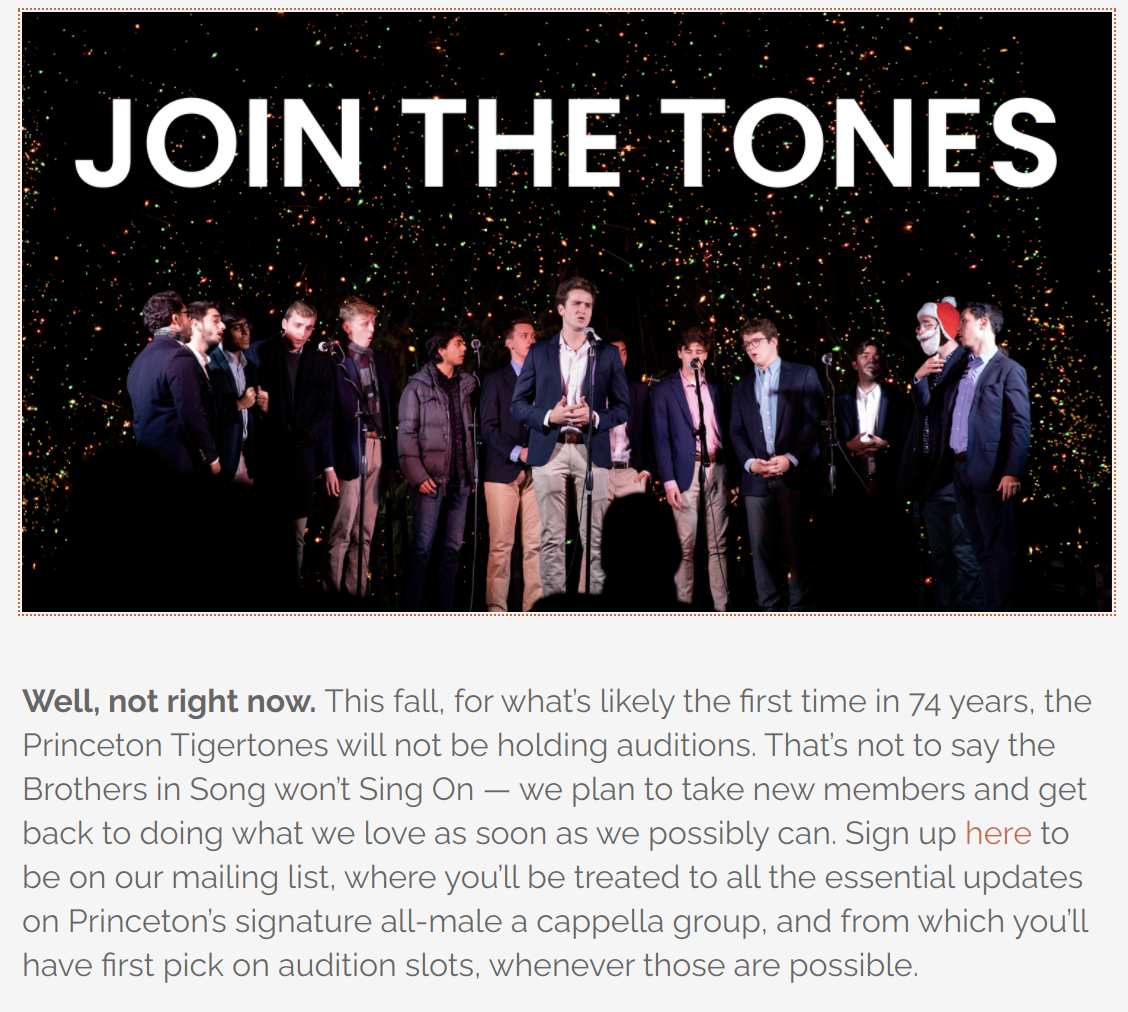 Still, groups of all genres agree that rehearsal, performance, and community-building will look fundamentally different until they can meet in-person again.

PAC president Sophie Blue ’21 told The Daily Princetonian that representatives from each group had genre-specific meetings in late July.

“We decided as a PAC board that, given how much uncertainty there is right now, and all the moving parts, it was best for each genre to come together as a group and have a conversation, and decide what they wanted to do as a collective unit,” she said.

A majority of the dance groups voted to not hold auditions due to the inequities that online auditions would create: disparities in home environments, video quality, and so on.

“It just reveals a lot about their lives in a way that an audition isn’t necessarily supposed to,” Blue said. “It’s supposed to be an equalizer: everyone comes to the same space, learns the same combo. But there’s a lot more factors when we’re in this virtual world.”

“We wanted everyone to have an equal chance to audition,” she said. “But dance groups can still hold workshops, open houses, and similar events like that in order to provide students, and especially freshmen, with a dance community.”

BodyHype Dance Company president Molly Gibbons ’22 told the ‘Prince’ that her company will be partnering on a workshop series with Culture Shock LA, “a professional hip hop company that focuses on the history of hip hop as a black cultural art form.”

“That kind of project felt particularly relevant given the political moment we are in,“ Gibbons said.

Similarly, most of the University’s a cappella groups have chosen to put auditions on hold. The eight members of “acaprez” — the Footnotes, Katzenjammers, Nassoons, Tigerlilies, Tigertones, Tigressions, Wildcats, and Roaring 20 — decided as a whole not to bring on new members until the spring semester. Non-acaprez groups Shere Khan and Old NasSoul are doing the same.

Nassoons president Sean Crites ’22 told the ‘Prince’ that everyone had similar concerns about equity in a virtual auditions process.

“The audition process is very talent-based, so it can already be seen as elitist and exclusive,” he said. “The last we want is to perpetuate that elitism through technological disparity.”

He also pointed out that the rules and traditions around acaprez underscore the importance of a uniform decision. Upon joining one group in acaprez, you can’t switch to another — so if each ensemble adopted a different strategy, auditionees would go into the process with a limited selection and might not find the right group for them.

“We wanted to make sure that people have the best experience they possibly can,” Crites said. “We didn’t want to turn them away from a cappella in general by having a bad one.”

Still, without auditions, he acknowledged, a cappella groups will dip in membership: “Every group is afraid of dying out.” Right now, the Nassoons have 11 members, with two on gap years, and according to Crites, other groups have even lower numbers.

“We will need to take more people [in future semesters],” he said. “That’s not to necessarily say that the bar or the caliber that we’re expecting changes, but it just means that we all really really want people to audition whenever it’s possible again.”

Groups that will audition

A cappella groups Koleinu and Kindred Spirit, on the other hand, are still holding auditions.

Kindred Spirit music director Charlotte Tausche ’21 wrote to the ‘Prince’ that the group opted to hold auditions with the hope of creating a space for students to feel connected to campus and meet other students, even in a virtual environment.

“Of course the experience of being in rehearsal or performing live was going to be missing,” Tausche wrote, “but we’re a worship group in addition to a singing group, and faith follows you wherever you go.”

ODUS Arts Program Coordinator Jessica Bailey told the ‘Prince’ that the religious affiliations of both groups “definitely played a part” in their decision to take new members.

Still, other concerns were involved in the decision. Koleinu, a Jewish-affiliated group, lost almost half its members when the Class of 2020 graduated.

“It was important to me to have people join the group, know what our culture is, know our repertoire, so that when the time comes we have people who are very well versed in the group to carry on that legacy,” President Jamie Rosen ’22 said.

According to Rosen, first-round auditions took place asynchronously, with auditionees submitting videos to be evaluated by the group. Callbacks, she explained, will be live over Zoom, where the group will do its best to evaluate singers virtually.

For Kindred Spirit, once the group is finalized, members will meet at least twice as week. Tausche wrote that the ensemble will hold one “sectional rehearsal” on Zoom each week to practice individual voice parts, and “one social meeting with devotionals and games.”

She also noted that audition turnout was lower than usual this year, so Kindred Spirit will be “heavily recruiting” in the next two semesters.

Other forms of engagement

For groups that cannot accept new members or perform, efforts are underway to plan alternative forms of engagement with the University community.

Wildcats president Claudia Humphrey ’22 wrote to the ‘Prince’ that without the ability to perform and rehearse in person, the Wildcats have “adapted to a majority social group with movie nights and social hours and such.”

“We plan to extend invitations to the community because we also do not take lightly our role as fosterers of Princeton community,” she added.

“I think one thing that is consistent across the groups is that folks are using this moment as an opportunity to engage with the Class of 2024 in a way that is much more open and available for everyone to have a chance to participate, as opposed to more members-only, exclusive events,” Arts Program Coordinator Jessica Bailey wrote.

PAC is planning to support its groups and promote community engagement through a variety of virtual workshops and social events.

According to Bailey and Blue, PAC will release a “collective calendar” that will provide offerings to the entire campus community, as well as a listserv for first-years interested in PAC groups. Ensembles will hold a monthly workshop series and are hoping to do inter-group collaborative projects as well as support a “performance opportunity” for the Class of 2024.

“One of the good things that could come out of this time is giving freshmen the opportunity to digest and more personally get to know people in each company,” Blue said. “Developing stronger personal connections one-on-one …  might let the freshmen make a more holistic decision in their process of joining a group.”

In the season two premiere of The Orange Table, co-hosts Omar Farah and Aishah Balogun call on University President Christopher L. Eisgruber '83 to respond to the concerns of the Black community and to sit down with the show in the near future. They also discuss the extent to which the University's social media properly depicts the demographic diversity of the campus.