In response to the University’s suggested “social distancing techniques,” a number of community spaces across campus have closed. Nonetheless, students still expressed concerns about the feasibility of such measures, especially in tightly-packed classrooms and lecture halls.

The measures — listed under the COVID-19 section of the University website — instruct community members to “keep at least six feet between yourself and another person in all public places,” “avoid close contact,” and “limit in-person meetings.”

Murray-Dodge Cafe, the Coffee Club, the Cotsen Children’s Library, residential college-sponsored study breaks, social events at the Graduate College, and student religious events are among the most prominent closures.

Spencer Koonin ’23, a student worker for Murray-Dodge Cafe, told The Daily Princetonian that he found out that the cafe would not open for the remainder of the week in a text from his supervisor, which he received on Monday evening. Koonin noted that the cafe shut down for a week to mitigate the risks posed by COVID-19.

At present, the website for the Office of Religious life displays a notice indicating that the cafe is “closed until further notice.”

The Coffee Club met a similar fate. The student-run coffee shop, located in the basement of the Campus Club, noted in an Instagram post on Monday evening that they “anticipate reopening on April 6th.”

“Presumably, if the University is taking all these other precautions, it probably makes sense that a space that is intended for a lot of different people to be interacting with each other also closes,” said Bobo Stankovikj ’20, a Coffee Club employee.

“I’m sad about it, but it’s probably a sensible policy. It’s not shocking to me that, in the context of everything else shutting down, the Coffee Club also closes,” he added.

Despite the closure of a number of public spaces, nearly all University libraries remain open at present. The University did announce in a tweet on Tuesday afternoon that the “public gallery” of the Cotsen Children’s Library, located within Firestone Library “will be closed until further notice.”

The Library also suspended all fined until June 2020.

Firestone, the system’s main building, also bears a “SOCIAL DISTANCING ENCOURAGED” sign at its entrance, noting to community members that “PUL [Princeton University Library] encourages you to maintain a distance of six feet between yourself and others.”

In keeping with the enumerated University policy that “events that involve more than 100 people … must be postponed or cancelled,” the residential colleges are cancelling study breaks. An email from the Mathey College Council on Tuesday morning announced the cancellation of a study break “to avoid large gatherings.”

On Tuesday, at 10:21 a.m., the Mathey College Council boasted of an upcoming House of Cupcakes study break. By 11:05 a.m., a follow-up email announced the event had been cancelled. In their original message, the organizers appeared to have been aware of the potential violations of social distancing protocol, encouraging students to “come relax (at least 6 ft. apart!) in the [Mathey Common Room].”

The other five residential colleges are taking similar measures. In an email to Wilsonites on Tuesday afternoon, the Wilson College Office noted that “large events are cancelled,” going a step further to indicate that “gatherings and meetings have been discouraged.”

The ‘Prince’ reached out to the deans and directors of student life (DSL) of every residential college for comment. None responded by the time of publication.

The procedures extend beyond residential college offices. Under the condition of anonymity, an RCA told the ‘Prince’ that their DSL had recommended against hosting study breaks and that they were expecting a related announcement to be released on Wednesday.

The policies similarly affect graduate students. Late Tuesday afternoon, the Graduate School, which oversees the University’s roughly 2,900 graduate students, announced in a tweet that “all of our upcoming Student Life events have been cancelled through April 5.”

The Muslim Life Program is moving “what [they] can” to the online video conferencing platform Zoom, beginning with a Qur’an Study Circle on Tuesday afternoon. All in-person gatherings appear to have been called off.

“Stay tuned for other [Muslim Life Program] programming that we may be able to move online,” Sultan wrote, “otherwise assume that it is canceled.”

In an email, CJL student board president Jake Brzowsky ’21 announced that the organization will host Shabbat dinner “on a limited basis,” asking students to RSVP so that organizers “can properly space out seating to comply with university recommendations.”

Though the University is limiting large gatherings and emphasizing its policy of social distancing, many students note that their classes and dining halls have been employing the practice with limited, if any, success.

“This is an unusual circumstance, and we need to have unusual responses,” noted Ava Vilensky ’23, a student in ECO 100: Introduction to Microeconomics. ECO 100 is taught to 341 students in McCosh 50.

“As of right now [for our midterm exam], we’re splitting the class into two different lecture halls, so instead of having [341] people in there together we’re going to have [170] in two separate rooms, which … seems pretty not ideal when the email has said that they’re trying to cancel events of 100-plus.”

A story on the University Instagram account, posted on Tuesday evening, confirmed that “students should continue to attend class and take midterms this week while employing social distancing techniques.”

“I think that it’s silly,” Vilensky said, “I think that students are already very stressed, so I don’t think that this is helping in any way, and I think midterms in general should be reevaluated.”

“I was at Frist for late meal, and while I was there, it didn’t seem that people had distanced themselves from other people any more than they usually do,” she said. “It seemed like a very normal environment other than the few people that you could hear talking about [coronavirus]. There was no serious concern for the distance between people.”

In light of Vilensky and Richter’s claims, Deputy University Spokesperson Mike Hotchkiss noted the University’s understanding of the situation.

“The global health emergency caused by COVID-19 presents a range of challenges,” Hotchkiss wrote in a statement to of the ‘Prince.’ “We recognize that it’s not easy to implement social distancing in all situations on campus and appreciate the efforts by our students, faculty and staff to protect the health and well-being of our community. This situation requires all of us to be adaptable and understanding as we face this together as a community.” 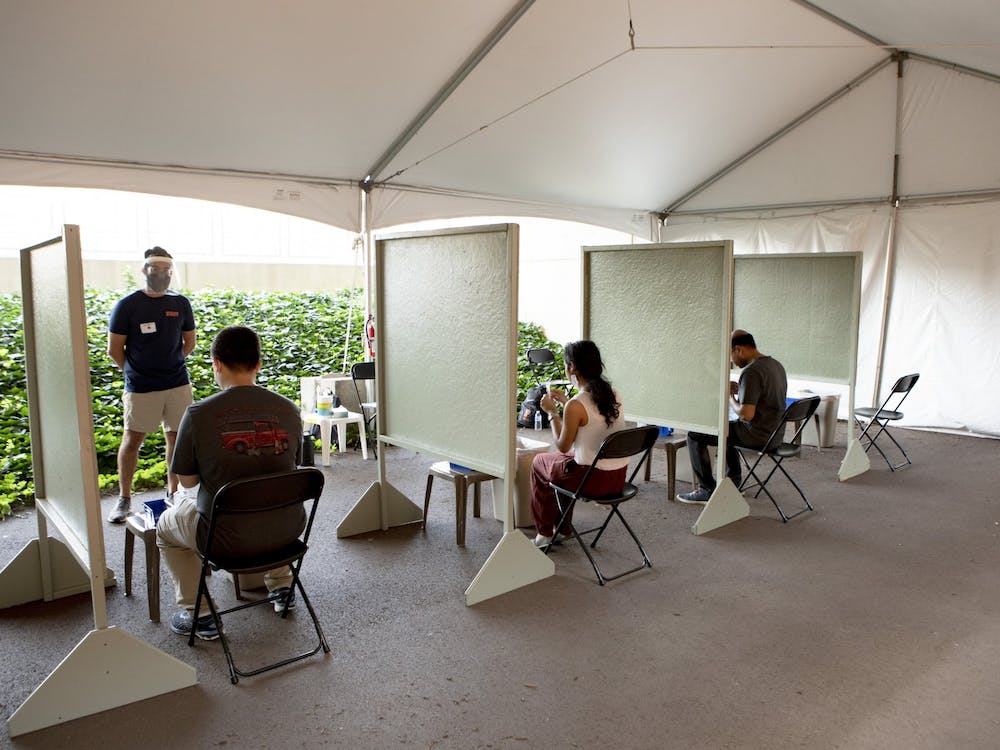