Every great team needs a Sydney Jordan: How Princeton’s senior forward excels on and off the court

Saturday’s Senior Night win over Harvard was an emotional moment for Princeton women’s basketball. Playing at Jadwin Gymnasium for the final time, Princeton’s seniors led the team to a gritty 61–58 win. Head coach Courtney Banghart earned her 250th career win in the process.

At the middle of it was senior forward Sydney Jordan. She was named player of the game and mobbed by teammates at midcourt after recording 10 points and seven rebounds.

Jordan’s full contribution to the basketball team, or the Princeton community, can’t be seen on a box score, however.

She anchors the women’s basketball team with her commitment to defense and detail. She is engaged in several service-oriented extracurriculars, including serving as the chair of the USG Diversity and Equity Committee and a member of the Community Service Inter-Club Council. She maintains a consciousness of political and social issues outside the Orange Bubble — she is writing a thesis on corporate social responsibility as a Philosophy major and joining a nationwide activist movement of black athletes by kneeling during the national anthem before games.

For her achievements, she became the first Princeton female athlete to win the Pyne Honor Prize, “the highest general distinction conferred on an undergraduate.”

Or, as Banghart puts it, “Sydney Jordan is what makes us great, in every way.”

Jordan comes from an athletic family. Her grandfather played in the NFL, and her two older sisters played Division I college basketball. She started playing basketball herself when she was six. She didn’t start to think of Princeton as a college option, though, until head coach Courtney Banghart took note of her on the DC-area AAU circuit.

Banghart said that Jordan possessed a “defensive ruggedness” that she sought in recruits. Once the coaching staff got their hands on Jordan’s transcripts and test scores, their confidence in her fit for the program increased further.

Jordan didn’t make an impact on the court immediately, averaging just 7.1 minutes and 1.5 points per game her first year.

According to Banghart, Jordan used that time to get better.

“Everything for her was additive. Once she figured out one concept, she’d work on the next one, and the next one,” said Banghart. “If you don’t take a day off, you get better really quickly.”

Three years later, Jordan is a starter and team captain. She said she’s progressed not just as a player, but as a leader.

“[Leadership] has been the biggest transition for me,” Jordan said. “Coming in as a freshman and not getting a lot of playing time, and now being a senior and a captain and having to reach out to the younger people on our team and help them in the way that the seniors on my team helped me in just getting through life here — I take pride in that position and hope that I’m doing as good a job as my seniors did.”

Jordan initially cracked the starting lineup as a sophomore due to the same defensive prowess that intrigued Banghart at her high school games. She would be responsible for guarding the other team’s best player, regardless of position. As a junior, she started 29 games and played a key role during Princeton’s run to an Ivy League championship and NCAA tournament bid.

For all her strengths on the court, Jordan has never been much of a scorer. She averaged just 4.1 points per game as a sophomore and 5.0 as a junior. This year, the team has asked her to step up in that department as well.

“That’s not how she wants to play,” said Banghart. “She wants to defend and rebound, and do all the little things. But I’ve asked her to do some of the big things, and it’s taken a huge evolution of hers to take that on.”

She’s responded to the call. As a senior, Jordan is averaging 6.8 points per game in 27 minutes per game, both career highs. Her services were particularly needed in this year’s non-conference schedule, which junior forward Bella Alarie missed much of with an injury. Jordan reeled off several double-digit point performances, including a three-game string of double-doubles.

“I think for us seniors, realizing how few games we have left as Princeton Tigers creates a sense of urgency,” Jordan said. “You can’t control what the other team is doing, but you can can control what you bring to the game and the energy that you bring.”

Jordan and her team currently sit in a tie for first in the Ivy League going into the regular season’s final weekend. After that, they’ll travel to New Haven, seeking to earn another Ivy tournament win and NCAA tournament bid.

Of course, Pyne Prizes aren’t awarded for solid play on the basketball court alone. Outside of basketball, Jordan has excelled academically and extracurricularly, so much so that it makes one wonder whether she has the same number of hours in a day as the rest of us.

On campus, Jordan has explored many different extracurriculars outside of basketball. Her term as the Chair of the Diversity and Equity Committee in the Undergraduate Student Government just came to an end, and she’s served as a chapel deacon through her four years at Princeton. She is currently on the Community Service Inter-Club Council where she represents her eating club, Cannon Dial Elm Club, and assists with community wide fundraisers, such as TruckFest, that are put on by members of the eating clubs.

“I manage it all with a lot of help,” Jordan explained. “All of our faculty fellows are so amazing and so willing to give us advice on anything. Having that help and support of people around me who have been through college before and can guide me through the difficult decisions has been really helpful.”

Jordan attributes much of her ability to be active in so many parts of campus life to the multitude of resources that Princeton has to offer, such as Career Services and the basketball team’s faculty fellows.

Jordan has also faced struggles in being able to manage her academics, athletics, and other extracurricular activities. She recalled being a freshman and studying with her teammates every day, but that those study sessions would easily turn into them watching videos or doing dances.

“I remember having to learn the time management part of it,” she said. “Learning to be more intentional about what my time was for and making it more special when I had the time to spend hanging out.”

Jordan has also made an impact in her decision to participate in political and social movements. Along with a few other teammates over the past two years, she has been a participant in the nationwide social movement of kneeling during the national anthem before games.

“We had a very long whole team discussion about the anthem a few years ago and it was not led by me,” Banghart explained. “It was led by the team and it was a chance for us to have honest and real conversations about what it means.”

Jordan expressed that having her teammates and coaches support their decisions to kneel despite them not participating meant a lot to her.

“I chose to kneel when the people who mean the most to me were able to understand what kneeling meant to me,” she wrote in an email to the ‘Prince’ after our interview.

Banghart supported her players’ right to free expression and said the entire women’s basketball team wanted to have an individual response, whether it was to kneel, stand, or put their hand on their chest.

“We all wanted to be a team as well, so that's why they put their hands on each others shoulders,” Banghart said. “We all support one another’s viewpoint, because it’s well thought-out.”

Jordan’s athletics, academics, extracurriculars, and commitment to social justice shows there’s more to being a varsity athlete at Princeton than just workouts and games.

There were challenges, from perfecting her time management skills, to sitting in Career Services, attempting to make tough decisions, and going to COS126 office hours full of frustration, just to find out that she missed only a period in the code.

But after four years, she has shown all current and future athletes on campus that while it may be difficult, it is possible to do it all.

So, what makes Sydney Jordan so special? Banghart was asked that question recently at an event honoring the Pyne Honor Prize recipients. Her answer?

“Everything. She just does everything right.” 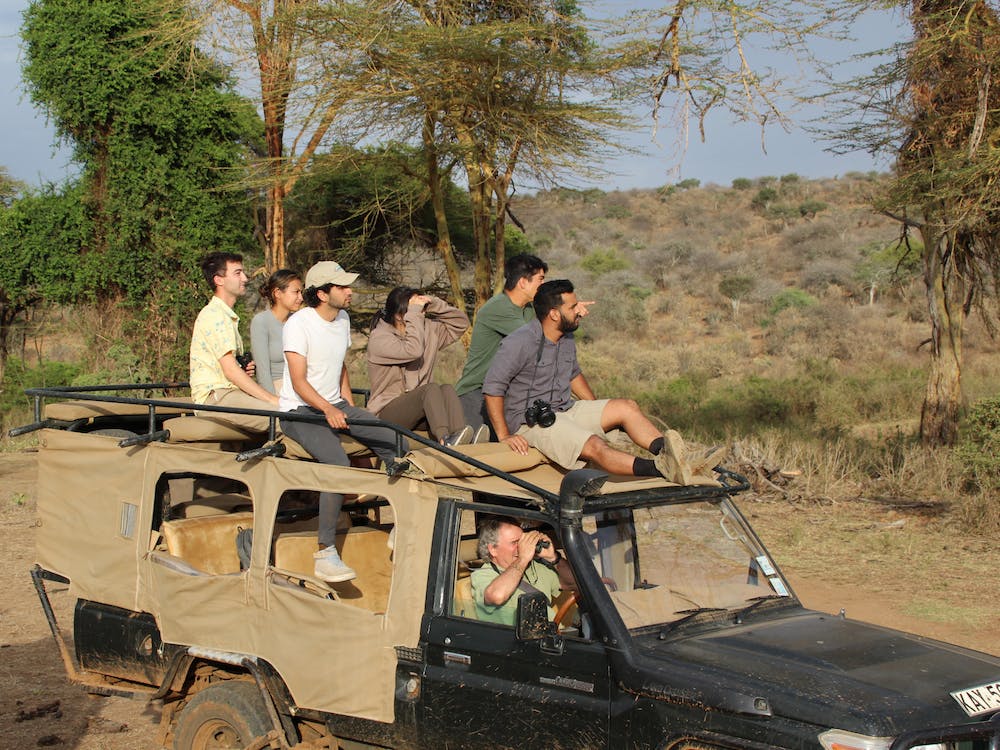 This article is the second installment in a series that explores one of Princeton’s most distinct academic traditions: the requirement of junior and senior independent work for nearly all undergraduate students. As thousands of students conduct and present unique research every year, these Features articles shed light on the inspiration, the outcomes, and everything in between.

This article is the second installment in a series that explores one of Princeton’s most distinct academic traditions: the requirement of junior and senior independent work for nearly all undergraduate students. As thousands of students conduct and present unique research every year, these Features articles shed light on the inspiration, the outcomes, and everything in between.

It was the Tigers’ third Ivy title in the past four seasons.

It was the Tigers’ third Ivy title in the past four seasons.

The Tigers won nine straight games to close out the regular season en route to the program’s 20th Ivy title.

The Tigers won nine straight games to close out the regular season en route to the program’s 20th Ivy title.