Why is school spirit reserved for alumni?

Going to Reunions my junior year of high school catapulted Princeton to the top of my college list. From catching a glimpse of the P-rade to seeing 85-year-old men raise their walkers in laughter around the crack of dawn, the internationally known affair impressed me with its enduring and effusive spirit.

Three quarters of the way through my first year at Princeton, I find myself wondering why this energy doesn’t trickle down into undergraduate life. I don’t want to envy middle-aged men and women trying to recapture the glory years I am living. Instead of waiting until after we graduate to bleed orange and black, Princeton students should try to foster a greater sense of school spirit now.

School spirit means pride, not partying. Yes, it would be great if Homecoming wasn’t our only tailgate of the year, but more importantly, we should be proud and excited to go to this school. Many of us are so wrapped up in our own pursuits and ambitions that we forget we are surrounded by so many different kinds of talent and excellence. I would love to be a part of a student body that committed to full game days, but I think that’s asking a lot from a populace that’s more tempted to camp out in the library on Saturdays. Even if for only the duration of one quarter or half, celebrating the accomplishments of others can make you feel even more excited about your own.

I know I felt more excited to return to the University after spring break when I learned about the achievements of Declan Farmer ’20. While on the train from Boston to Newark Liberty International Airport, I read that Farmer scored a key goal against Canada and helped Team USA clinch the gold in the Paralympic sled hockey finals. This was the first time I was hearing of the game, and I was disappointed that there had not been a more visible effort on the account of Undergraduate Student Government or Princeton Athletics to show support for Farmer and promote the game. To my knowledge, there was no viewing party on campus to celebrate this achievement by a fellow student. Farmer played during spring break, but even an email from USG telling students that the game was occurring and where to watch it would have shown solidarity.

This example is indicative of the school spirit on campus. Each person and organization excels, but within their own silos. There is very little collective excitement around particular events, especially athletic ones.

The school spirit I am focusing on mostly involves athletics. This is a traditional and semi-antiquated definition, and I do think school spirit can and should be expanded to include celebrating the performing and visual arts. At the University, however, theater and dance productions do receive lots of attention and participation from the student body. Arch sings by a cappella groups are usually well attended. Students are always sending emails on residential college listservs selling tickets to diSiac Dance Company, BodyHype, Más Flow, or Black Arts Company performances, which are snatched up within minutes. Those shows almost always sell out, as do productions by the Princeton University Players. These shows only happen a few times during a semester, which helps drum up excitement, but attending athletic events presents three specific benefits.

First of all, they are free! No tickets or planning in advance needed, all you need is a PUID to get into a game or match as a University student. Taking advantage of free opportunities to have fun with your friends is a good way to remain inclusive and thoughtful of all economic standings.

Second, the University has many sports teams, meaning games are frequent. Students could make a routine of attending the same sporting event for a little bit each week or branching out to watch a sport that wasn’t available where they grew up. Attending my first fencing match this year was one of the few Saturday afternoons I didn’t spend in the library — and it was worth it. Especially for first-years, having an accessible, well attended social event to look forward to each week or a specific event to invite new friends to and rally around would be a great addition to the social culture. Imagine how much easier the transition into the University would have been if zee groups got together during the first Saturdays of the year to walk down to football games.

Third, athletics are competitive and encourage spectators to pick a side. Identifying as a Tiger and cheering for a peer in your Spanish class that always wears team gear could further a sense of solidarity among students. The divide between students and student-athletes at the University is a common topic of discussion, and this could be a small way of alleviating that tension. Even saying a quick “congrats on the game” to those students you watched from the stands on Saturday could help make the University feel like a more cohesive and supportive environment for all pursuits.

Most of us work hard enough that going to a game presents an accessible and healthy opportunity to blow off steam, even if only for an hour or two. Instead of a Netflix or HBO binge, getting outside and celebrating fellow students could increase your productivity later.

If I manage to graduate from the University, I plan to join the great swath of alumni that return every year for the epic festivities. But I don’t want the nostalgia for my college years to trump the enjoyment I felt during them. Knowing myself, attending more athletic events would be a small, yet beneficial move towards this goal. I outlined my reasoning, but I wonder how many students align with it. On any given day, much of the student body can be seen in a Princeton t-shirt or sweatshirt, but I think that’s more out of habit than loyalty. What does that mean about the state of the tight-knit community Princeton prides and promotes itself on having?

Rachel Kennedy is a first-year from Dedham, Mass. She can be reached at rk19@princeton.edu. 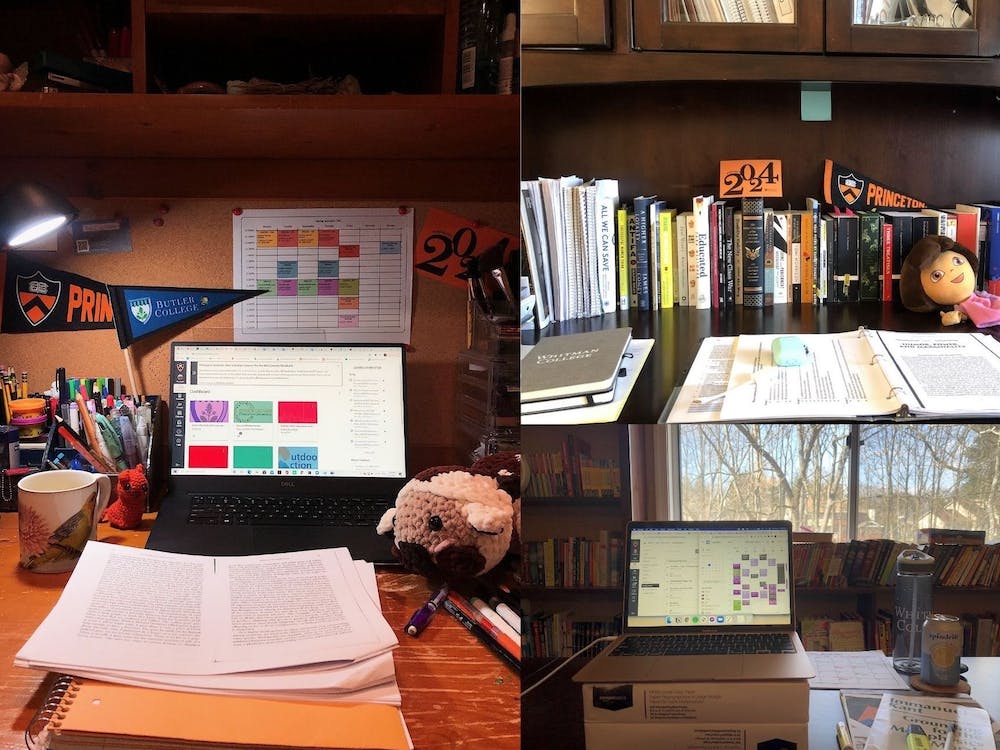 With the start of the spring semester, students flocked to a socially distanced campus in droves. Roughly a quarter of enrolled students chose not to. The Daily Princetonian sat down with a few of these students to talk about their experiences living off-campus and what motivated them to not return.

With the start of the spring semester, many students flocked to a socially distanced campus in droves, willing to undergo the arrival quarantine, adhere to social-distancing requirements, and rejoin the on-campus community. Roughly a quarter of enrolled students chose not to. The Daily Princetonian sat down with a few of these students to talk about their experiences living off-campus and what motivated them to not return.