Ioffe '05 discusses Russia, Trump, and the role of the journalist

Journalist Julia Ioffe ‘05 set out to dispel some of the hype surrounding U.S.-Russian relations in her recent cover article for The Atlantic, entitled “What Putin Really Wants.” That same hype, however, probably contributed to the long line at the University to hear Ioffe speak in person.

Professor of Music Simon Morrison moderated a conversation between Ioffe and Deborah Amos, a seasoned National Public Radio reporter and a Ferris Professor of Journalism at the University.

Ioffe, who covers national security and foreign policy for The Atlantic, was quick to outline the two traps to which Americans often fall victim: seeing Putin and Russians as more competent than they actually are, and blaming the result of the 2016 presidential election on an outside power.

Ioffe pointed out that the latter is, ironically, “very Russian.”

She explained that she doesn’t think Putin coordinated every component of the hack of the Democratic National Committee and the incendiary and highly polarizing social media ads that have now been revealed to be funded by an arm of the Kremlin, but that even if he did, the onus still falls on the American people.

“[Putin] didn’t create Donald Trump,” said Ioffe. “He didn’t make the American people ... illiterate when it comes to the press and politics, and [he didn’t] make them lazy citizens. These are all things we did, and we’re responsible for.”

She fears that American citizens place the blame on Russia, instead of taking an honest look at themselves. Furthermore, with the rhetoric at such a high pitch, Ioffe has found it difficult to fight the heightened narrative.

“It’s hard to go on and be the person, and say, ‘Well actually, that’s not how that works.’ or ‘actually, Putin is not omnipotent.’” said Ioffe. “Eventually, they stop inviting you on. They’re happy to invite people who know less about Russia, but are happy to feed the line of ‘Yes, Putin knew everything, and he orchestrated this meeting.’”

The solution, Ioffe and Amos insisted, is to separate emotion from the reporting process.

“There was some hysterical coverage,” said Amos. “Isn’t our job to be as unemotional as possible? If we lose that, then we’re really lost.”

Ioffe noted that most consumers of news are distracted from important – but “unsexy” – developments by tweets and racist comments.

“The dismantling of the EPA, the packing of the judiciary, all the changes at the DOJ ... all these things are tremendously complicated and unsexy,” she explained. These are the changes, Ioffe added, that may last 30 to 40 years after the Trump presidency.

Ioffe said that her Russian journalist friends advised that the American press, “stop sprinting and get ready for the marathon.”

After the event, Zaza Asatiani '21 said that the same “omnipotent Putin” trope so prevalent in American media is also found in his native country of Georgia. He was particularly comforted by the thought that Putin is less capable than Georgian citizens often believe. Asatiani also said that he wishes to learn how to fight Russian propaganda at home in the small, former Soviet bloc country. Tensions between the two countries have been strained on the border, and they went to war in 2008 over disputed separatist movements.

“Georgians say that ... 'we can’t defeat [Russia],'” explained Asatiani. “I would like to emphasize to them that Russia is actually quite disorganized.”

When an audience member asked if Ioffe had ever spoken to Putin, she replied that she hadn’t, but that she has seen him in person. “He is very short,” she said.

The event, titled “Journalist Julia Ioffe ‘05: On Russia, Putin, Trump, and Her Career,” was sponsored by the Humanities Council and the Department of Music. It took place in McCosh 10 on Tuesday, Jan. 23 at 4:30 p.m. 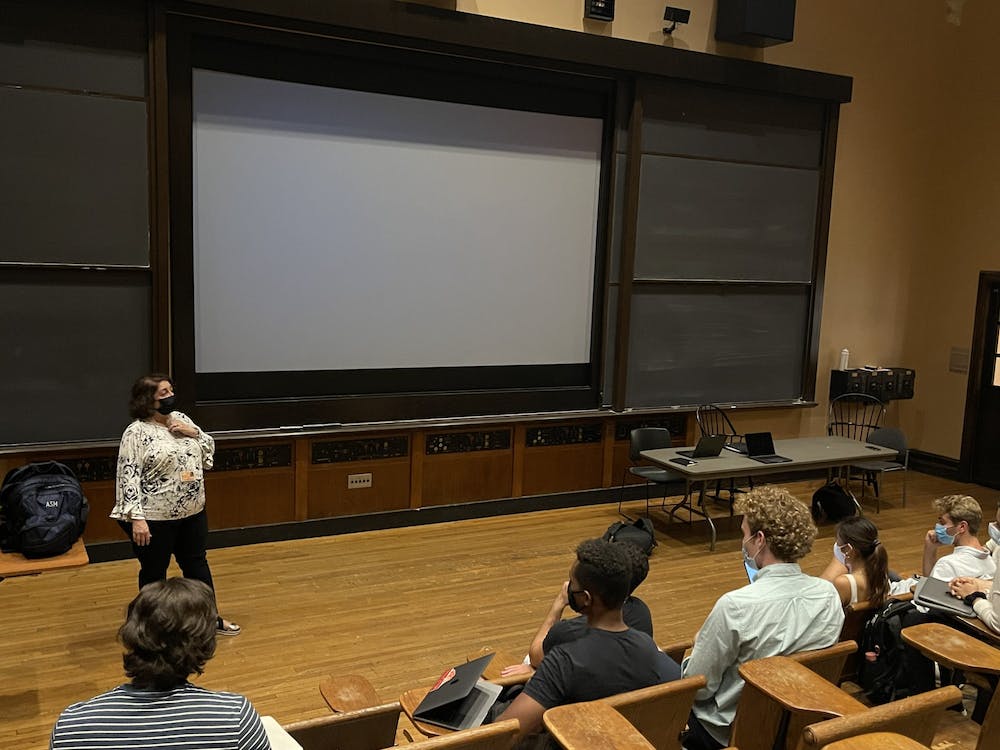