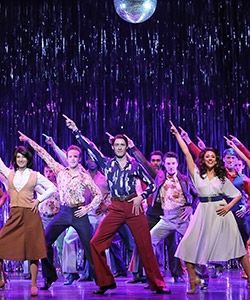 “Well, you can tell by the way I use my walk, I’m a woman’s man: no time to talk.” With these classic words from the Bee Gees’ “Stayin’ Alive,” “Saturday Night Fever,” a musical based on the 1977 film of the same name, introduces Tony Manero to the audience.

The musical follows Manero, a young Brooklyn native known locally for his dance prowess, as he prepares for a dance competition at the discotheque he frequents, falls in love with his dance partner, Stephanie Mangano, and navigates between a disapproving family and troubled group of friends. In this opening moment of the show Manero struts downstage dressed in quintessential ’70s garb until he is joined by the entire ensemble with the timeless phrase, “Ah, ha, ha, ha, stayin’ alive, stayin’ alive.”

The way I see it, this first musical number encapsulates everything that was both good and bad about the performance. The recognizable tune, technicolor aesthetic, and incredibly stylized choreography inspired an immediate surge of energy from the audience. I heard the woman to my left as she hummed along to the familiar tune while I felt the man sitting behind me bopping his knee to the music.

As any ode to an era, the production captures the look, sound, and essence of ’70s culture that clearly resonated with the predominantly older audience. The show delivers countless dynamic and energetic production numbers to songs like “Boogie Shoes,” “Disco Inferno” and “Night Fever,” giving its audience an undeniably entertaining and fun performance.

I had a really enjoyable time watching the show and at the end of the performance I stood up with the rest of the audience as the cast led one final audience-driven dance session. However, I don’t think the sole or even predominant purpose of a musical is to provide the audience with just a fun night out, especially since the musical seemed to get at a lot more than just a whimsical portrayal of disco culture.

The script portrays Manero’s disillusionment as he gradually realizes that the lives of him and his friends are not as carefree or fulfilling as he once imagined them to be. One of his friends feels forced into marrying his high school girlfriend after finding out that she is pregnant, another is hospitalized after being beaten up by a rival gang, and another dies after falling off a bridge that the group of friends jokingly scales for fun.

However, the character development and dialogue are so overshadowed by the big musical numbers that these more substantive scenes come across as disjointed and misplaced, and therefore are quickly forgotten in order to return to another show-stopping scene at the disco. These scenes come one after another so quickly that Manero’s “transformation” appears incredibly unconvincing and fairly uneventful.

Of course, this is not the fault of the touring company, NorthCore Productions in association with 2Luck Concepts, that I saw on Saturday. I actually think that Matt Alfano, the actor who portrayed Manero, along with some of the other performers, brought a really impressive level of truthfulness and subtlety to a somewhat cheesy and artificial script. Their characters managed to feel real and relatable even in the midst of the flash and glitz that characterized most of the performance.

Some of the staging, however, was less effective in capturing this truthfulness. For instance, in the second act, four of the actors perform “Stuck,” in which they each convey their feelings of being unable to escape their current troubles. The number was staged so that the four actors were framed by a spotlight as they moved in very choreographed ways within that space, literally portraying the characters as “trapped” by or “stuck” inside of the spotlight. There was opportunity in songs like this to create an interesting dynamic between the high energy, theatrical performance numbers and the more stripped-down, nuanced moments. To me, however, these contrasting pieces were all approached with the same glitz, glamour, and heightened dramatization, making it difficult for the audience to connect to the instances of the show that were meant to have meaning.

“Saturday Night Fever” may not be the show to see if you are looking for a thought-provoking, deeply moving musical with strong storylines and interesting characters to follow. It is, however, a show with great music and amazing dance numbers that people of all ages and backgrounds can connect to and appreciate. The show, especially the version of the show that I saw at the McCarter Theater, was extremely fun, energetic, and interactive. I left with a smile, which is far from the worst thing that can happen at the theater.

A preview of an investigation from The Daily Princetonian’s Data section on the finances of the eating clubs.

A preview of an investigation from The Daily Princetonian’s Data section on the finances of the eating clubs.