In classrooms and on social media, Trump’s unexpected victory has generated abundant conversations of fear and worry across campus. The Daily Princetonian sat down with two members of the College Republicans to discuss the outlook of the United States under Trump. Paul Draper ’18 is the president of College Republicans, the New Jersey Millenials for Cruz director, and the Executive Director of the New Jersey College Republicans. Connor Pfeiffer ’18 was the Northeast Regional Campus Coordinator for Jeb Bush’s presidential campaign, former State Chairman of the High School Republicans of Texas, and an ex officio member of the Texas Republican Executive Committee. The interview has been edited for clarity and length.

DP: Since Tuesday, there has been a lot of talk about what a Trump presidency would look like. Many students on this campus are frankly scared about what’s to come. What are your thoughts?

Connor Pfeiffer: A lot of the extreme things that Trump opposed, such as the Muslim Ban and the Wall, will be constrained by Republicans in Congress. And even if he does get all the Republicans, he still needs 60 votes in the Senate, and he will have difficulties in getting that bipartisanship. Now the exception to that is reconciliation, which is a once per year measure to reduce budget deficits. The Republicans have already said that for the reconciliation process in 2017, they will use it to repeal Obamacare. Obamacare will likely be repealed in the summer. In terms of what the replacement looks like, there are a lot of different approaches being discussed now in the Republican Party.

Paul Draper: I would agree with that. I would note that even for things that he would only need a 51 Senate majority, if there are two senators in the Republican party who disagree with him, which is very likely, that’s all it takes to block him. And we know for sure there is already considerable discontent with Trump inside the Republican party from both moderate and conservative Senators.

DP: So let’s talk about the Muslim ban. Many students, Muslim and non-Muslim, are very concerned about it. What’s your take?

PD: So that’s definitely not going to happen. Even a Republican Congress would not let that through.

DP: So as conservatives, you both oppose this potential policy?

PD: I do too. I think it’s a bad policy. I’m almost certain it’s not going to happen.

CP: Well here is what it depends on: no way will this [policy] get through Congress. There are at least two Republicans who would oppose the Muslim ban, and I would hope there are way more than that. The question is how much prosecutorial discretion the president has in terms of letting people into the country.

PD: But currently prosecutorial discretion only applies in instances of deportation and when it comes to illegal immigrants.

CP: Yes, but it’s a question at this point. The other point is that after people became very concerned about a religious test – which would violate the first amendment of the Constitution – Trump reformed his policy to a ban on immigration from a list all the countries with terrorism concerns in his mind, and these countries are all predominantly Muslim countries. I still don’t think this is something he can do in practice. There will definitely be lawsuits if this happens.

PD: Yea, I don’t think he can just do it with every country with a predominantly Muslim population. But if he designates specific countries like Syria and Afghanistan, he will get more traction and could get that through.

DP: Let’s talk about immigration. Much of Trump’s rhetoric about eliminating visas, instituting a merit system, building a wall, and so on are very concerning and frightening to students on campus. What do you say to your peers on that note?

CP: The thing with the legal immigration system is that it’s very set in law. So a lot of the things that Trump is saying will require Congress to change these laws. Now I know there’s a lot of support in Congress from both parties to increase the number of H1B Visas and high-skill worker visas. Trump has been wishy-washy on this issue like on many other issues. The other thing is that immigration is not a deficit issue, so he can’t use reconciliation and would need sixty votes, which means he would need the Democrats in the Senate. So he would need to come up with some proposal that has both Democratic and Republican support. That will be difficult because the Democrats will insist that other items in immigration reform, like pathways to citizenship for illegal immigrations will be included. I don’t think his immigration policies will be nearly as extreme as he’s said in the primaries.

PD: Though for some of the most important policies like stopping DAPA and DACA, the deferred action programs, he can do on his own.

CP: That is going to end. In fact, the Supreme Court had already said it’s legally suspect.

PD: I think he will also be able to do simple things like ending catch-and-release for illegal immigrants who have committed crimes.

CP: Yes, he definitely has discretion to do that. He is probably going to tell the director of ICE to focus on deporting illegal immigrants with criminal records. There’s also the issue of sanctuary cities, of which Princeton is one. Congress could withhold funding to cities that do not cooperate with law enforcement, but that would require new legislation, and the Democrats will oppose it. To put it simply, Trump has said a lot of things in the primary that as a Republican, I disagree with completely. But he will be very constrained by the Congress.

DP: What about drastically limiting work visas for international students who need to work to support their education? Would something like that happen?

CP: We should be handing out visas to international students when they get their diplomas. We should dramatically increase the number of high-skilled visas. Because if someone has studied in an American university and wants to work here, it would be stupid to not let them stay here. And a lot of Republicans feel the same way. Now Trump comes from a more nativist swing of the party that’s skeptical of immigrants. But he’s also a businessman who has worked with a lot of high-skilled immigrants. Is he going to let his pragmatic side take over now that the election is over? I don’t know. Republicans around the country, including probably us, didn’t expect Trump to win. So we have very little idea of what he is going to do in many areas until we see concrete plans.

DP: And in terms of social issues. What about concerns surrounding women’s reproductive health?

PD: That’s something they could put in the budget reconciliation.

CP: They could. But I don’t think they are going to use reconciliation on that.

PD: But if Congress puts a bill to defund Planned Parenthood, he would probably sign it.

CP: Well, Trump has been kind of supportive of Planned Parenthood. The federal government doesn’t have much of a role in abortion issues, it’s much more on the state level. The only issue that could affect abortion on a national level is the overturning of Roe v. Wade decision. However, because you have Roe, Casey, and now Hellerstedt, some of the most conservative members of the court would not overturn that because of stare decisis [going by precedent].

PD: Yes, even if they got five justices on the Supreme Court who are ideologically conservative, for the reason of stare decisis, they still may not overturn it just out of respect for precedent.

DP: Where does this leave the Democratic party?

CP: The Democratic party is essentially at its weakest position right now since before the Second World War. Currently, in addition to House and Senate, 32 out of the 50 governors are Republican, and a half of all state legislatures are controlled by the Republican party. It will be very difficult for the Democratic Party to have a viable selection of candidates for 2018 and 2010. Republicans are expected to gain seats in 2018.

DP: So for everything that Trump has said, how can we have an open mind about his presidency?

CP: I’ve been fairly critical of Trump, but our system has its checks and balances. Trump will face opposition from the conservative Republican establishment and will be forced to be pragmatic and moderate. Again, what he can do will be largely constrained by Congress.

PD: Media bias and the Democratic party have played a role in this election to generate fear. If you look at his policies closely, there’s not as much reason to be concerned, and we need conversation across party lines. The surest way to continue the divide is to close the conversation.

Domestic travel will be permitted for undergraduate students in the fall semester, with the new guidelines taking effect on Aug. 23. However, University-sanctioned international travel remains suspended for undergraduates, with one exception for those traveling to approved Study Abroad programs.

Domestic travel will be permitted for undergraduate students in the fall semester, with the new guidelines taking effect on Aug. 23. However, University-sanctioned international travel remains suspended for undergraduates, with one exception for those traveling to approved Study Abroad programs.

Originally set to expire by July 31, the pandemic expansions of the SHP — including free telehealth and therapy — were eliminated on July 3 with the end of NJ’s Public Health Emergency. But many undergraduate and graduate students feel that this reduction in healthcare coverage comes too soon.

Originally set to expire by July 31, the pandemic expansions of the SHP — including free telehealth and therapy — were eliminated on July 3 with the end of NJ’s Public Health Emergency. But many undergraduate and graduate students feel that this reduction in healthcare coverage comes too soon. 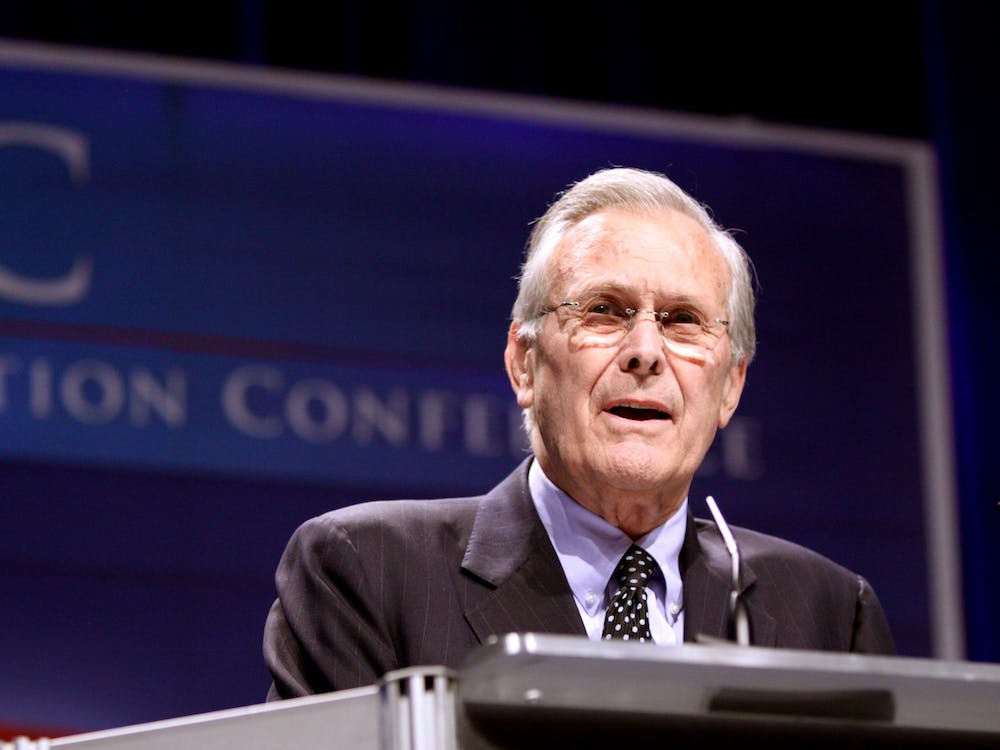 Rumsfeld, who served Secretary of Defense for both Gerald Ford and George W. Bush and was one of the key figures in the U.S. invasions of Iraq and Afghanistan, has died at age 88.

Rumsfeld, who served Secretary of Defense for both Gerald Ford and George W. Bush and was one of the key figures in the U.S. invasions of Iraq and Afghanistan, has died at age 88.