While the lack of sex on campus has often been the source of humorous speculation, the results of a campus-wide 'Prince' survey suggest that the T-shirt's message may be closer to fact than fiction.

The survey, conducted at residential college dining halls, coops and eating clubs (except Tiger Inn, which refused to participate), asked students a range of questions about sexual behavior and relationships. Results were tabulated drawing appropriately weighted random samples from each dining facility.

Fifty-six percent of University students reported having sexual intercourse in their lifetime. This statistic contrasts sharply with a 1995 Center for Disease Control report that found that 82.9 percent of students at four-year institutions nationwide have engaged in sexual relations. The recent findings also differ from McCosh Health Center's 1995 CORE survey, which was mailed to a random sample of students, that reported 65 percent of Princeton students as having been sexually active within the past year.

Princeton ranks behind Harvard, Yale and the University of Pennsylvania in terms of percentage of sexually active students.

Despite the numbers, students may perceive a different social environment. Some Princeton students suggest that their peers may be more sexually active than the numbers indicate. George Mastoris '99, Jennifer Yeh '01 and Jessica Vesterman '00 all estimated that at least 65 percent of students were not virgins. Yeh said she expected the freedom of college to lead to more sexual promiscuity, but apparently that has not been the case.

Junior "Melissa" guessed that 60 percent of the students were not virgins but added that Princeton was not the same as other universities. She said, "Other schools associate partying with sex, but here (sex) is much more low key."

Carlos Fernandez '00, however, guessed the number who have had sex would be below 40 percent. He explained, "People here either have no interest in the opposite sex, or they just don't know what to do."

Some have suggested that the environment of the University is less conducive to forming relationships. Nearly 40 percent of the students surveyed have never been in at least a month-long relationship with another University student.

Some students indicate that time constraints are a barrier to developing personal relationships. Paul Griffin '01 said the University lifestyle can leave little time for other pursuits.

"People get too involved in other things, and I think that is a shame," he said. "The academic focus is obviously why we come here, but if (many students have never been in relationships with other students), I think that is unfortunate."

University Health Services' Director of Health Education, Karen Gordon, agreed that priorities could be a factor. "Students are concerned about wanting a relationship but not having time for it," she said. "Ideally, you should be able to balance academic and social life, and college is the time to explore that."

Freshman "Courtney" said the lack of a time commitment marred one of her relationships. "I would always go to see him in his room," she said. "But he would only come over to my room if it was Saturday night and he was drunk." She added, "I think not having time is an excuse rather than a reason because if you find someone you want to be with, you'll find time."

Sophomore "Anne" has been dating her boyfriend for over a year and feels that the time commitment is worth the sacrifice. "If I can spend my free time with someone I love, then I place a lot of value on that," she said. "I feel like my relationship challenges me emotionally and spiritually beyond what an everyday relationship with a different person would."

There are several reasons for this sudden jump, said resident adviser Emily Lin '99. "Freshmen become more familiar and used to (the idea of) sex when they gain maturity," she said. "People's attitudes toward sex shift and become more liberal. In eating clubs, you always hear sexual jokes and banter, and club emails have sexual motifs."

Anastacia Rohrman '99 said peer pressure eventually makes students change their beliefs. "When freshmen come in, many still believe that sex before marriage is wrong," she said. "But as they spend more time here, they are bombarded with the message that everybody is doing it and that (sex) is fun."

Fifty-one percent of the women on campus reported being virgins, while thirty-nine percent of males indicated they were virgins. This statistic contrasts with the CDC report, which states that only 14.9 percent of women and 19.4 percent of men at four-year institutions nationwide are virgins.

Sophomore "Mark" attributes this disparity to the idea that there are two distinct types of women at Princeton. "There are a lot of virgin girls, but that is because all the guys are having sex with same girls," he said. "I know a freshman girl who has slept with at least 20 guys I know since she got here."

The survey results tended to polar extremes, showing the two most sexually active groups are people who had sex with another Princeton student without being in at least a month-long relationship and those who have been in relationships with other Princeton students for over one year. The percentage of students in these groups are 21 percent and 15 percent respectively.

Sex education advisers on campus offered several explanations for the University's relative sexual inactivity. Some cited student reluctance to address the issue of sex as a contributing factor.

Burley also suggested that students may have moral qualms about engaging in sexual activity. She said that several students she knows believe that "being a virgin is almost considered an honor."

Gordon offered a similar explanation. "Recently people seem to be more caught up in the moral questions about sexual activity," she said. "There are students here who feel strongly about no sexual activity until marriage."

Freshman "Lauren" said she is one of these students.

"I have always learned that sex before marriage is wrong," she said.

She added that, before deciding to marry, "you have to keep questioning your true feelings. But when you don't have things to make you stop and think, you can get too into it and make a mistake that doesn't leave either person better off than when they started."

Burley also discussed the unique characteristics of Princeton students as a possible explanation for some students' sexual abstinence.

"A slice of Princeton is not the same as a slice of America," she said. "This is a traditional society where you only have sex with your boyfriend or girlfriend."

According to sophomore "James," however, a steady relationship is not a necessary prerequisite to sex. "I have definitely have had sex turned down to me because I wouldn't be their boyfriend," he said. "But I have still had a couple of one-night stands with girls I partied with."

Griffin responds that Princeton students are generally different from those at other schools. "We have a lot of 'good' kids, who are not going to just go out and have sex," he said. "There's a whole different culture of kids here."

Gordon's experience with students here, however, has led her to conclude that on the whole, they are not so different from the national norm. "Princeton students are generally representative of the college age population in four-year institutions in terms of sexual or personal activity."

Recent studies conducted by McCosh Health Center and The Daily Princetonian, have shown that in terms of alcohol consumption and illegal drug abuse, University students are roughly in line with national averages.

Gordon doubts that the prevailing "culture" influences students. "Princeton itself doesn't kill sex," she said. "Sex is an individual decision. Once someone makes that decision, it is up to them." 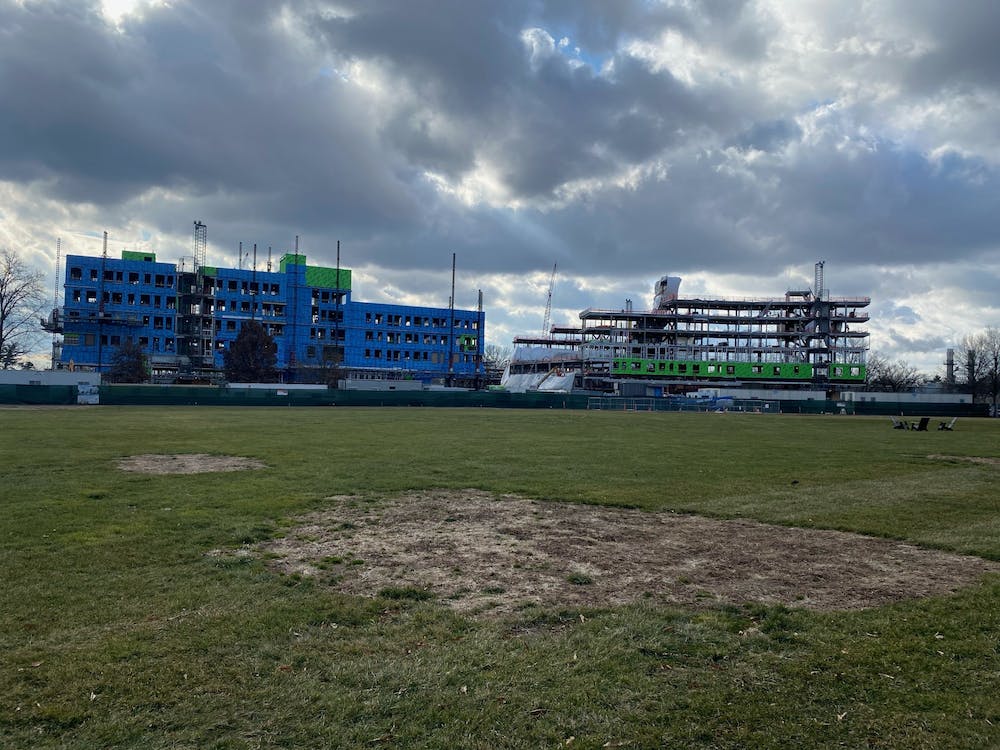 “It's at an interesting part of campus that slopes down, so the dining hall is actually underground. It's very green. It’s modern. At the bottom of Addy Hall, there's a studio that can be used for [activities like] ceramics or dance and it looks out onto a courtyard there,” Bill Addy described. “We'll have new air conditioned dorm rooms, study areas, and areas for students to congregate outside of their rooms, so it's going to be a remarkably nice place to live in.”

“It's at an interesting part of campus that slopes down, so the dining hall is actually underground. It's very green. It’s modern. At the bottom of Addy Hall, there's a studio that can be used for [activities like] ceramics or dance and it looks out onto a courtyard there,” Bill Addy described. “We'll have new air conditioned dorm rooms, study areas, and areas for students to congregate outside of their rooms, so it's going to be a remarkably nice place to live in.” 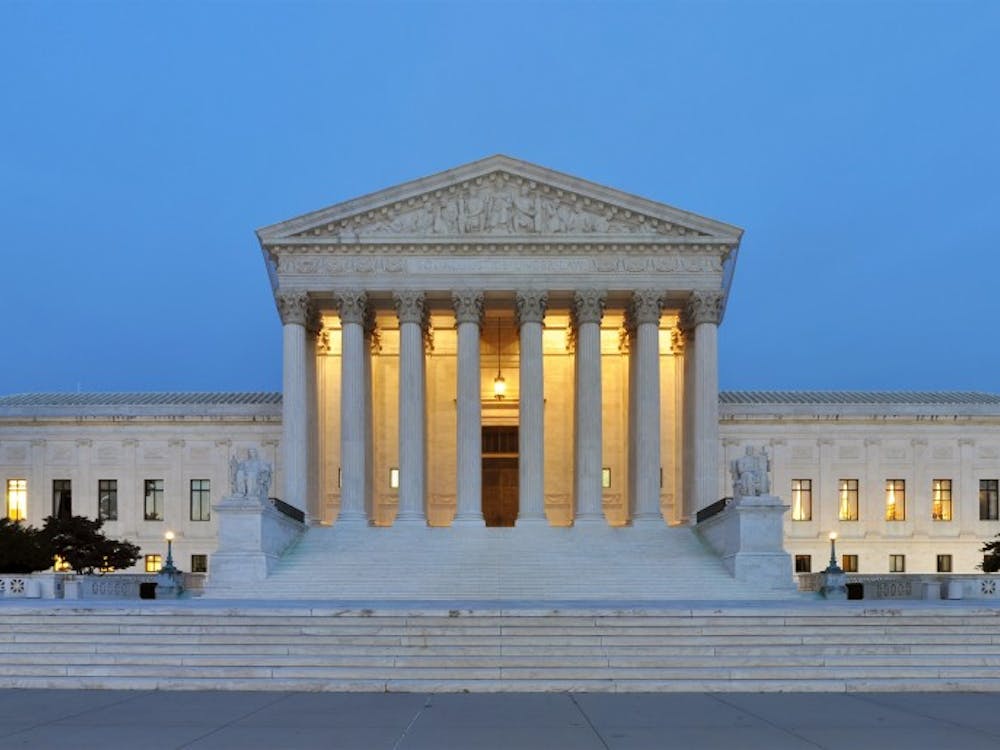 They will be part of a bipartisan group of legal and other scholars who will create a report with arguments for and against Supreme Court reform.

They will be part of a bipartisan group of legal and other scholars who will create a report with arguments for and against Supreme Court reform.