Bringing a movie behemoth back down to earth

Any year in which "Titanic," a movie which apparently was written by a mildly retarded 13-year-old girl, is far and away the most acclaimed film doesn't bode well for cinema. Where are the good movies?

I recently asked myself the same question about music, and I was very pleasantly surprised when an answer occurred to me: England. Yes, England –home of Brit-pop's Blur, Oasis and Radiohead, techno's Prodigy and Chemical Brothers, trip-hop's Massive Attack and Portishead, uncategorizable bands Black Grape and Supergrass, and all-around genius Tricky, as well as aging but still interesting icons like Elvis Costello.

Hell, even the Spice Girls aren't that bad. If we have to put up with lousy pop bands, may they all have that much cleavage. England was nice enough not to cave in to the Nazi war machine during World War II, and now they've been considerate enough to revitalize music. Thanks, England!

Yet while England has saved music, that plucky little nation has yet to save cinema and probably won't any time in the near future. Mike Leigh, the "Trainspotting" group, Merchant/Ivory and now Gary Oldman have made some nice films, but generally English movies tend to deal either with constipated-looking people in period costume or poor people with unintelligible accents and severe emotional problems. A little of that goes a very long way.

Since England's not going to save film, and other nations tend to make films in foreign languages that are subtitled before they reach our shore – which means we have to read them – which pretty much defeats the point of movies, I guess it's up to America to rise to the challenge.

We made "Titanic." If this is the best we can offer, we are in big trouble. Why do I dislike "Titanic"? Here's a brief list of reasons:

1. No one from the salvage crew ever says to the ancient Gloria Stuart, "I'm really glad that all those decades ago, when you were played by Kate Winslet, you got your rocks off with that dreamy Leonardo DiCaprio, but will you get to the diamond already? We're running a salvage operation, and while it's really nice you got laid and you feel a need to share that experience with us, you're costing us a fortune by droning on and on, so let's keep your wrinkly ass on the topic of the diamond."

3. The first hour of the movie, when you get right down to it, consists of people saying, "Man, this Titanic is one big boat! I mean, it's HUGE!" over and over and over.

4. A crucial scene in the movie involves dreamy Leonardo DiCaprio teaching Kate Winslet how to spit. It's rumored that a scene was left on the cutting room floor in which dreamy Leonardo wins her heart at a farting contest.

5. After bitching and moaning about all the deaths caused by the fact that the Titanic was unprepared for disaster, the old woman throws in the ocean a diamond worth enough to build a hospital because, apparently, she was feeling symbolic.

6. Due to an odd bit casting, dreamy Leonardo DiCaprio appears to be half Kate Winslet's age and maybe 2/3 of her weight. During the sequences when he leads her around the corridors of the sinking "Titanic," I expected her suddenly to declare, "Get on my back, little guy!" and then carry him to safety.

7. In the dream sequence, Kate Winslet imagines that not only did everyone survive the Titanic, but they decided to throw a party for her and that dreamy Leonardo!

8. Celine Dion is on the soundtrack.

And, of course, "Titanic" features three hours and fifteen minutes worth of awful dialogue, with my personal favorite bon mot being when Kate Winslet tells her fiance that he is an "unimaginable bastard" (zing!).

Of course, these are just my opinions. Maybe I'm all turned around on this "Titanic" thing. Maybe some day I'll have three hours and fifteen minutes to waste and I'll watch the movie and say, "You know, Leonardo's best friend – the stereotypical Italian who runs around acting happy at the beginning of the movie and then vanishes for a couple hours only to come back and die when the ship sinks? – he's really a great character."

But I doubt it. See "LA Confidential" and may God protect us all.

The fight against gerrymandering is expansive. It is endlessly interdisciplinary. The process of redrawing fair, just voting maps does not work without a confluence of diverse disciplines. 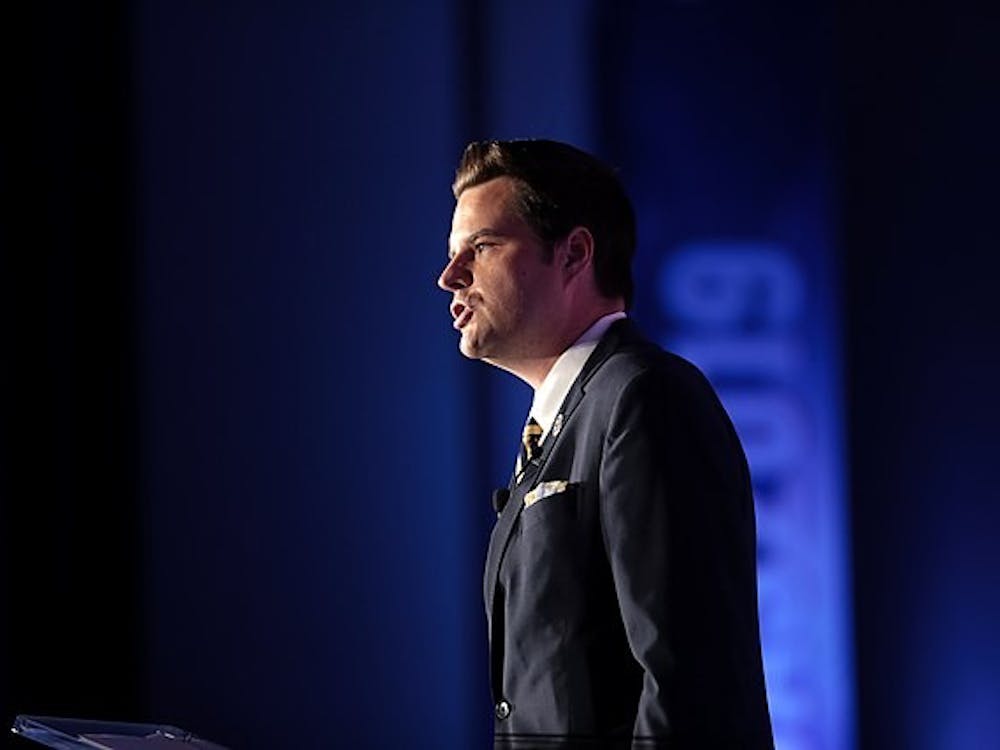 “Sugar relationships are not inherently non-consensual, but they possess the foundational qualities necessary to empower and enable men like Gaetz to pursue minors — many of them resembling the young women of Princeton’s campus — and think they can get away with it.”

“This merger erases the history of student activism and labor that produced the two distinct centers and makes it seem as if social difference and adversity have been solved. A single center for gender and sexuality, rather than additional centers bearing distinct names and sources of funding, falsely signals the issues we spent so much our Princeton careers raising have been adequately addressed.”

“This merger erases the history of student activism and labor that produced the two distinct centers and makes it seem as if social difference and adversity have been solved. A single center for Gender and Sexuality, rather than additional centers bearing distinct names and sources of funding, falsely signals the issues we spent so much our Princeton careers raising have been adequately addressed.”