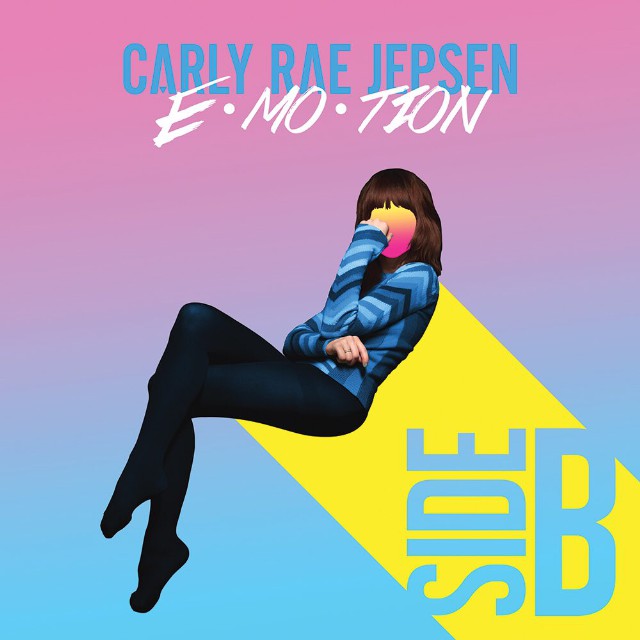 Normally, I wouldn’t care to bring attention to an artist’s collection of B-sides. After all, they’re usually the songs that weren’t good enough to be a part of the actual album or release, and they tend to feel like another way record companies milk fans for more money. However, these are Carly Rae Jepsen’s B-sides I’m talking about, and they’re the B-sides to Emotion.

I never had a chance to review Emotion, but to quickly sum up my feelings, that album is pure pop gold. Most people have probably at least heard “I Really Like You,” which memorably featured a lip-syncing Tom Hanks for its music video, but if you haven’t listened through the whole record, you’re missing out. It’s fun, free, and full of earworms, even if most songs didn’t make a run for summer radio airplay. Unsurprisingly, Emotion Side B feels like a continuation of the original album. According to Jepsen, she released this EP because she wanted to give back to fans after witnessing everyone’s love and support on her tour, and she described these songs as “extra tunes” made during the process for Emotion.

The EP starts off with “First Time,” an infectious pop track showcasing Jepsen’s trademark steal-your-heart vocals. Throughout the album, there’s a prevailing 80’s music feel, as Jepsen sings over many classic synth and bass sounds, which are often mixed into disco beats. This combination enables her to sound modern and old all at once, such as on “The One.” On the surface, there’s nothing particularly strong or powerful about Jepsen’s voice, but in today’s pool of over-processed EDM voices trying to sound as ethereal as possible, Jepsen stands out by sounding real—as if you’re in a room with her alone and she’s only talking to you. For example, “Fever” sounds almost like a Celine Dion anthem at points, but instead of reaching a soaring climax, the chorus keeps steady by using Jepsen’s lower octave as the main focus, having the higher one sit in the background instead. Thus, while some artists achieve emotion authenticity by chasing the stratosphere (e.g. Ariana Grande), Jepsen’s strength is the inherent down-to-earth, conversational quality in the way she sings.

Granted, it’s easy to see why some songs on the EP didn’t make the first cut. Songs like “Body Language” and “Cry” sound like lesser versions of other Jepsen songs that probably would’ve sounded more filler than anything else on Emotion. At the same time, it’s worth emphasizing that many of these B-sides have the potential to top singles that other artists are putting out. Some songs even feel like they should’ve been released as her own singles, such as “Store,” where Jepsen enchantingly leads you into a simple, catchy chorus where she does Becky G one better.

With only a couple more weeks left before school starts, I really recommend taking this EP along with you on your summer last road trip. You’ll be dancing in your seat in no time.

Listen to Emotion Side Bon iTunesorSpotify.