Spring Breakers is like the extended cut of a raunchy low-budget music video that was compiled using a broken editing program. That may sound harsh, but if you’ve seen the movie you know I’m being easy on it. When I have to pay $11 to see a film, I expect it to meet a few basic standards: a plot that holds my attention, well-written dialogue, and halfway decent character development. Harmony Korine’s Spring Breakers, I’m sorry to say, struck out in all of these categories . . . by a long shot. 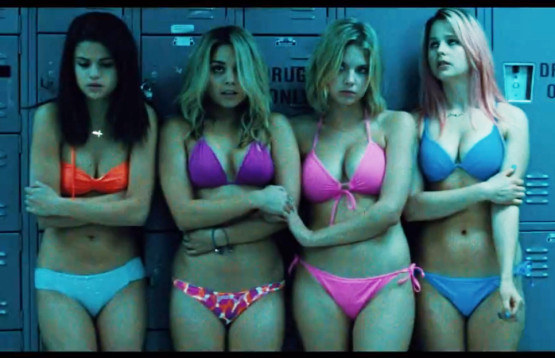 Faith eventually leaves Florida because Al creeps her out, and the audience sympathizes because they wish they could leave the theater too. Her storyline is never wrapped up. In fact, she never appears on screen again and is never mentioned at all by any of the characters, which isn’t surprising considering the fact that not once in the entire 90 minutes do two characters have a conversation. When the girls talk to each other, one of them repeats the same sentence over and over while the other ones touches her hair. There are voiceovers galore, but they are all taken from the same 5 minute audio track. I’m not exaggerating when I say that every single line in this movie was repeated at least four times. The most iconic line, spoken probably twelve times by each character, is “spring break . . . spring break forever.” You don’t know the definition of creepy until you’ve heard James Franco whispering that line like a war cry and staring deep into your soul while you wonder how many earrings could be made out of his shiny, 2 pound grille.