The Undergraduate Student Government (USG) Senate’s meeting on Sunday, Nov. 21 included two language reviews of referenda to be voted on in the upcoming winter elections, a presentation from Vote100, and a discussion of The Daily Princetonian’s recent coverage of student experiences related to the Honor Code.

Academics Chair Austin Davis ’23 introduced a referendum that proposes universal midterm grade reporting. Should the referendum be approved by the undergraduate student body, a resolution would be submitted calling on the University to make three changes to the current grading policy.

As outlined by Davis, the first change would mandate reporting of midterm grades on TigerHub for all courses, enforced by the Office of the Dean of the College. Under current policy, this is only required for 100- and 200-level courses.

Secondly, the referendum would encourage the creation of a TigerHub commenting system. Professors would gain the ability to provide written feedback on a student’s progress in the course, with the goals of adding context to a letter grade and promoting student-professor dialogue.

Finally, the referendum would discourage the use of the “N” designation by making written comments mandatory for any professor who chooses not to designate a midterm grade. Presently, professors have the option of listing a student’s grade as “N,” or “no grade,” even for courses at the 100- and 200-levels.

At this point, Davis noted that the University’s response to the proposal has been tepid.

Preeti Chemiti ’23 introduced a second referendum that calls on the University to encourage professors to include mental health resources in their syllabi. The referendum includes a summary of resources available to undergraduates, co-composed by Chemiti with TigerWell and two Counseling and Psychological Services staff members, that professors can use in their syllabi.

“A lot of what the referendum details is the statistics of what we’ve experienced during the COVID-19 semester and over the past year, and how that period of time has sparked a really important conversation, in my opinion, about where mental health stands at Princeton and how administrative action can be bolstered,” said Chemiti.

Upon a suggestion from U-Councilor Isabella Shutt ’24, Chemiti approved an amendment to the referendum changing the language to specifically call on the Office of the Dean of the College to implement the proposal.

The Senate unanimously approved the language in both referenda. Their role in this instance was not to approve or reject the content of the referenda — that’s up to voters to decide in December — but rather to determine whether the referenda fall within the bounds of USG’s jurisdiction.

Parliamentarian Kate Liu ’23 explained that approval of referenda language by the Senate allows for sponsors to begin campaigning in favor of the referenda.

USG also hosted a presentation from Vote100 Fellows Joe Shipley ’22 and Ana Blanco ’23 breaking down data on the University’s voter turnout for the 2020 election. Notable findings included that 75.4 percent of eligible Princetonians voted. In addition, the University showed the highest growth rate in voter turnout in the Ivy League.

Moving forward into election cycles in 2022 and beyond, the Fellows expressed that a priority for Vote100 is to ensure that it remains an active organization.

One of the group’s goals for the future is to revive a State Teams campaign that would task students from individual states with disseminating election information to Princeton students from their respective states. They also hope to restructure their position within Whig-Clio and ODUS in order to better secure funding and support from the University.

Other goals included collaboration with the ‘Prince,’ elected officials, and nonprofits to provide nonpartisan information about candidates to students. The group also hopes to implement the physical signing of a Vote100 pledge upon matriculation.

Sustainability Chair Mayu Takeuchi ’23 raised a question about the inclusion of international students in civic engagement efforts. U-Councilor Stephen Daniels ’24 suggested including an international student cohort within Vote100’s State Directors program as a potential solution to this issue.

U-Councilor Eric Sklanka ’23 also raised a question about the possibility of parallel programming for faculty and staff.

In concluding the presentation, Shipley commented on the significant progress made with regard to civic engagement within Princeton’s undergraduate community.

“The goal is for people to be heartened by this, but not to become complacent,” said Shipley

Daniels opened a conversation about Marie-Rose Sheinerman and Claire Silberman’s Nov. 18 article, “Life after accusation: Inside Princeton’s Honor Code.” He stated that he wanted to bring everyone’s attention to the article because he believes it indicates an opportunity for USG to affect change through methods like making suggestions to administrators and putting forth proposals through referenda in the spring election cycle.

“The article is fantastic. I think the issues of invasive discipline are still prevalent,” commented Class Senator Reade Ben ’22, who has been working on a related report based on student experiences during the COVID-19 pandemic.

Various members of the Senate emphasized issues with the Honor Code brought up by the article, including the utilization of outside investigators in hearings, student mental health issues during proceedings, and ways in which the proceedings disproportionately affect first-generation and low-income students.

“If I were in that position, I would not know what to do,” said Davis. “It’s something that I don’t think, as Chair, really sits well with me.”

Upon wrapping up the discussion, President Christian Potter ’22 extended a question on how to institutionalize these conversations. He expressed a desire to create more avenues besides the ‘Prince’ for bringing these issues to light.

“There’s room to be proactive … in a way that we haven’t been before,” said Potter.

USG Senate holds open meetings on Sundays in Robertson Hall Room 016. Although this week’s meeting took place at 5 p.m. due to a scheduling conflict with Sunday’s bonfire, the Senate ordinarily convenes at 8 p.m.

Annie Rupertus is a first-year and a News and Print Design contributor for the 'Prince.' She can be reached at arupertus@princeton.edu or @annierupertus on Instagram and Twitter. 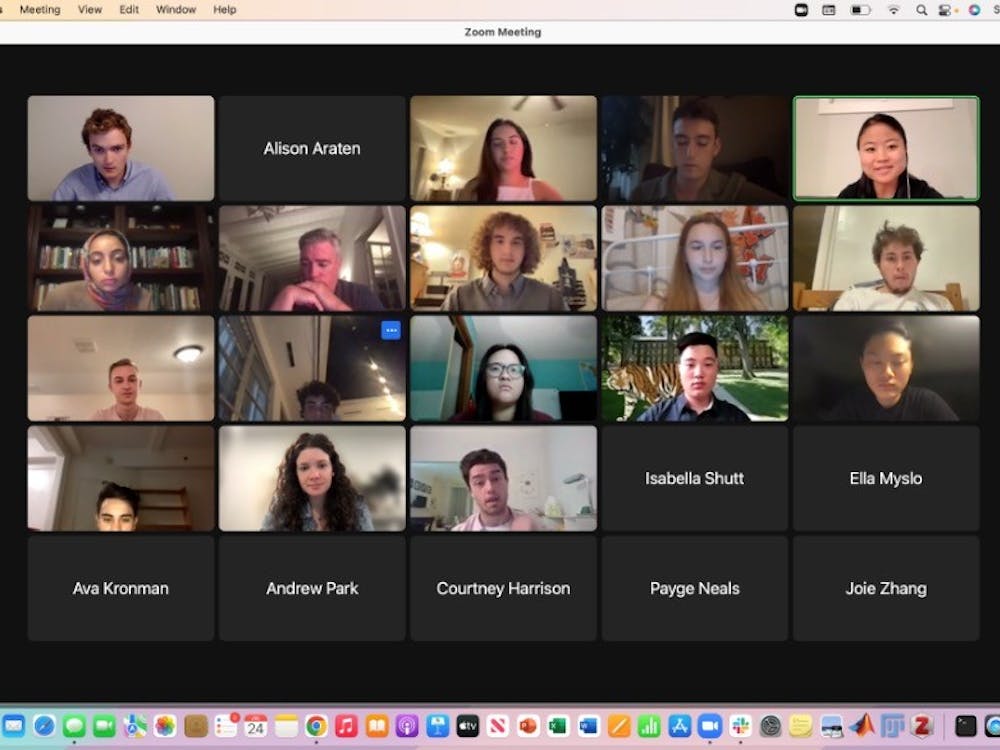