Saturday saw a marquee matchup for No. 24 Princeton football (3–0), as they traveled to West Long Branch, N.J., to take on No. 25 Monmouth (3–2). The Tigers surged past the Hawks in the fourth quarter to ultimately win 31–28.

The two teams had met once before in program history, in a 2018 game which saw the Tigers dominate at Powers Field, winning by a score of 51–9. However, Monmouth, winner of two straight Big south conference titles, was expected to put up a fight.

Despite being down 21–6 midway through the third quarter, the Tigers surged ahead with 22 unanswered points to take a seven-point lead in the fourth quarter, as the passing game on offense that was largely dormant against Columbia heated up, and the Tigers’ defense began to come up with big plays. After a late defensive touchdown by Monmouth tied the game at 28, the Tigers drove down the field, and first-year kicker Jeffrey Sexton hit the game-winning field goal with just 10 seconds on the clock to give the Tigers a 31–28 win. The comeback was the Tigers’ largest since a 2012 game against Harvard that saw Princeton come back from a 24-point fourth quarter deficit.

Recap: @JeffreySexton3 sends the Tigers home with an impressive 31-28 victory over No. 25 Monmouthhttps://t.co/0Du2hbUdDI

The Tigers’ offense started off its first drive with much better play than last week’s subpar showing against Columbia. Senior receiver Jacob Birmelin made a 15-yard catch on the game’s first play, and senior running back Collin Eaddy picked up 16 yards on one rush later in the drive, as the Tigers marched deep into Monmouth territory. A 16-yard rush by senior quarterback Cole Smith brought Princeton inside the Monmouth 10 yard-line, but the Hawks held strong and Princeton’s 11-play opening drive ended in Sexton’s 21-yard field goal.

Monmouth responded immediately, methodically marching all the way to the Tigers’ 12 yard-line, where they were met with fourth down and two yards to go. Instead of electing to kick, as the Tigers had, the Hawks went for it, and the risk paid off; Monmouth quarterback Tony Muskett located receiver Joey Aldarelli for a touchdown, giving the Hawks a 7–3 lead. Muskett went 6/6 for 51 yards on the drive, as the Tigers’ defense got exposed for the first time all season, giving up 84 yards on 14 plays. This was just the second score the Tigers had given up in their first four games, and the first one they’d allowed in the first half of a game. It was also the Tigers’ first time trailing all year.

Monmouth’s defense showed up on the next drive, as back-to-back sacks from the Hawks’ defensive end, Lorenzo Hernandez, forced Princeton to punt into the wind at the end of the first quarter. Although junior punter Will Powers’ kick went just 29 yards, the Tigers held Monmouth’s offense in check, coming up with a third-down sack to end the drive. The Hawks responded with a third-down sack of their own on Princeton’s next drive, and once again got to start a drive near midfield, which ended promptly on a turnover on downs.

The Tigers, meanwhile, were able to pick up a fourth-down conversion on their next drive, before they too turned the ball over on downs. Closing out the half, Monmouth finally took advantage of their good field position, scoring another touchdown on a long pass down the middle to Zach Tredway with one minute left in the half, expanding the Hawks’ lead to 14–3. By halftime, Princeton had allowed more points in one half against Monmouth (14) than they had yielded in their first three games combined (7).

Attempting to shrink that gap in the remaining seconds before the half, the Tigers marched down the field thanks to a pair of completions to senior wide receivers Jacob Birmelin and Dylan Classi. Sexton was able to knock in a 46-yard kick with the wind at his back, shrinking the halftime lead to 14–6.

Monmouth got the ball at the start of the second half, and continued to wear down the Princeton defense with their tempo and their running game. Using up half of the third quarter, the Hawks marched 66 yards on 16 plays, a drive that culminated in a one-yard rushing touchdown from Juwon Farri that gave Monmouth a 21–6 lead.

Down 15 and desperately needing points, Smith found junior wide receiver Andrei Iosivas for a 38-yard bomb two drives later, scoring what initially appeared to be a touchdown. The referees reviewed the play and determined that Iosivas was down inside the one yard-line, but Eaddy was able to punch the ball in on the next play for his third touchdown in the last two games. A two-point conversion pass from Smith to Classi cut the Monmouth lead to 21–14 with 1:44 remaining in the third quarter.

Princeton continued to build momentum as the fourth quarter began, once again driving into Monmouth territory. Smith found Classi for a big play down to the Monmouth one yard-line, and Eaddy picked up another one-yard touchdown to tie the game at 21 with 11:55 remaining. Then, on the ensuing Monmouth kickoff return, the Hawks’ receiver Lonnie Moore IV coughed up the football, and the Tigers recovered with a chance to take the lead.

The Tigers looked to be taking advantage of the opportunity, as a few touches for Eaddy followed by a pass interference penalty got the Tigers to the Monmouth 24-yard line. Monmouth’s DeAndre Clifton then picked up back-to-back sacks on Smith, leaving the Tigers with a 3rd and 22 at the Monmouth 36-yard line.

Six rushers blitzed Smith on third down, and he promptly hurled the ball down the left sideline towards Iosivas, who came down with a miraculous 31-yard grab between the arms of the Monmouth defensive back. Two plays later, Eaddy gave the Tigers a 28–21 lead with his third score of the day on a four-yard run.

Princeton’s defense continued its second-half resurgence on the Hawks’ next drive. Monmouth survived a fourth down, a dropped interception, and two forced fumbles, before punting the ball back to the Tigers with 3:09 remaining. JoJo Hawkins nearly gave up the ball when catching the punt, but thankfully fell on his own fumble to keep the ball in Smith’s hands.

Unfortunately for the Tigers, Smith immediately gave the ball back to Monmouth, throwing a pick six which tied the game at 28 with 2:53 remaining. With a chance to redeem themselves and potentially win the game, the Tigers picked up a huge fourth-down conversion before Smith found Birmelin to move the Tigers into Monmouth territory.

With 40 seconds remaining, the Tigers had a 4th and 6 at the Monmouth 39 yard-line. Smith heroically located Classi for a huge 18-yard pass to move the Tigers to the Hawks’ 21 yard-line. The Tigers took a few shots at the end zone before Sexton was given a chance to give the Tigers a lead with 16 seconds remaining from 35 yards out. With a 21 mile-per-hour wind blowing in his face and to his right, Sexton drove his kick leftward before the wind snuck it through the uprights, giving the Tigers a 31–28 lead with 10 seconds remaining. Monmouth’s trick play attempt on the game’s final play failed, and the Tigers jumped for joy on the sideline, coming up with a huge road win and keeping their undefeated season alive.

The biggest storyline coming out of this game, though, is the Tigers’ passing game coming to life after a dismal showing against Columbia. Smith managed 282 yards on 27/41 passing, giving him his highest number of passing yards since the opening win over Lehigh. Smith’s favorite targets included Birmelin (9 catches, 109 yards), Iosivas (4 catches, 76 yards), and Classi (5 catches, 64 yards).

The Tigers’ offense, which came into the game leading Ivy League offenses with 424.3 yards per game, also succeeded at times in the run game, especially around the goal line, where Eaddy (16 carries, 47 yards) racked up three scores for the third time in his Princeton career. However, the team only managed 53 yards as a whole.

The win moves the Tigers to 4–0 on the season, leaving them with six Ivy League matchups to close out the schedule. They are now third in the Ivy League, after Harvard beat Cornell University 24–10 Saturday, and after Dartmouth survived at home against Yale, winning 24–17 in overtime. All three teams are 4–0 on the season, but Dartmouth and Harvard each have two conference wins compared to Princeton’s one, putting them ahead of the Tigers in the standings.

The Tigers will travel to Brown for next Saturday’s game and return home to face Harvard on Oct. 23.

Wilson Conn is a staff writer for the 'Prince' sports section. He can be reached at wconn@princeton.edu or on twitter at @wilson_conn. 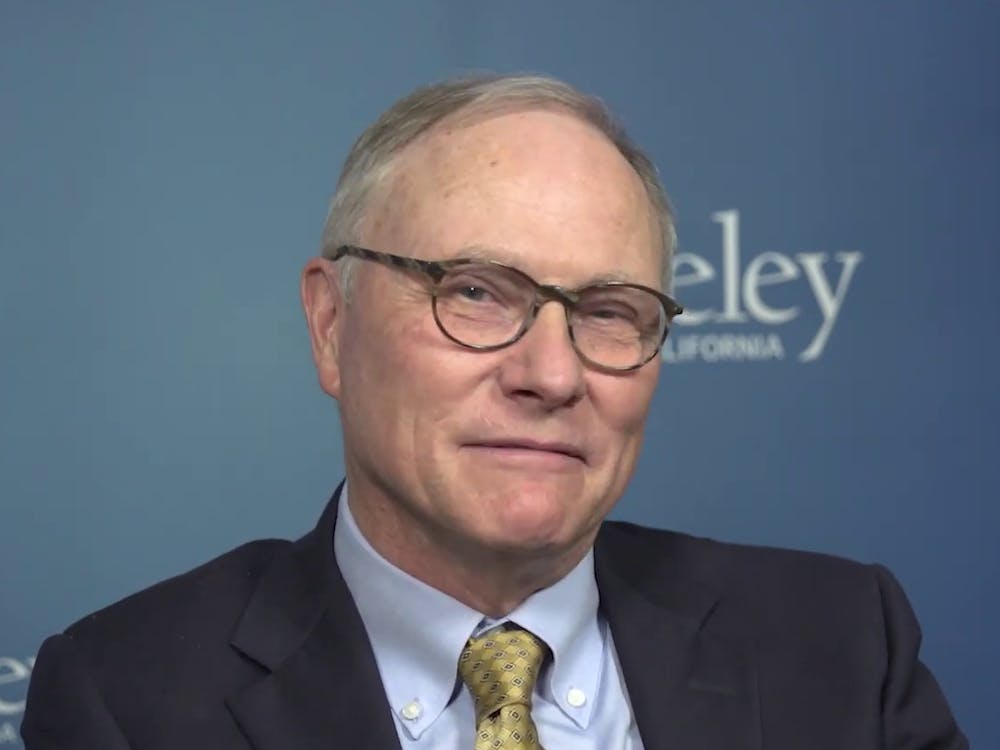 A graduate alumnus and former University faculty member, David Card was awarded the Nobel Prize in Economic Sciences “for his empirical contributions to labor economics.” He sat with the ‘Prince’ to discuss his prize, his career, and Princeton’s influence on his work.

A graduate alumnus and former University faculty member, David Card was awarded the Nobel Prize in Economic Sciences “for his empirical contributions to labor economics.” He sat with the ‘Prince’ to discuss his prize, his career, and Princeton’s influence on his work.

The judge found that the suit failed to meet the requisite standards for jurisdiction in federal court in New Jersey, but did not rule on the merits of Katz’s claims. The decision leaves the door open for Katz to refile his suit against the ACLS in New York, where the society is based.

The judge found that the suit failed to meet the requisite standards for jurisdiction in federal court in New Jersey, but did not rule on the merits of Katz’s claims. The decision leaves the door open for Katz to refile his suit against the ACLS in New York, where the society is based.