Today’s puzzle from Juliet Corless, with its numerous references to the color wheel, has me wishing I paid more attention in art class — if only I knew this skill would be helpful in solving ‘Prince’ puzzles. Corless makes her puzzles debut, while simultaneously summoning everyone’s inner Rothko.

Read on below for help with tricky clues, thoughts from Corless, and the answer key.

9A: Judging from her invocation of several sophisticated hues, Corless must have been a fabulous art student in middle school. However, if you’re like me and you just barely scraped by — drawing stick figures and suns in the corner of your paper well into your teens — then you may be unaware that light beige is also referred to as ECRU.

20A: Maybe I am showing my true northeastern colors on this one, but as a New Yorker, nobody around me was inclined to speak in a slow, lazy DRAWL. Adding this to my list of new words I have learned from ‘Prince’ crosswords.

35A: Perhaps I’ve been spending too much time in the library, but if you too thought this clue referred to the ink used in writing implements, then think again. It’s time to embrace your inner rebellious college student and ink up your body with a TAT. If nothing else, it will shock your family upon your forthcoming return.

64A: In case you’ve never made a call on landline, which I fear may be true for some fellow Gen Z-ers, it may help you to know that often the “0” button on old phones also represented an “O” for operator, shortened to OPER.

68A: This fancy clue makes me want to ask Corless about her nail care routine; however, if yours is non-existent (like mine), maybe use this as a reminder to grab an EMERY board and file your nails down every once in a while. After all, shorter nails do trap less dirt and germs, which is particularly advantageous during pandemic life.

9D: Located on the beach on Florida’s Gulf Coast, ECKERD college definitely sounds appealing as we navigate the ever-uncertain end of winter in New Jersey.

31D: BSE students may light up when reading this clue; however, if you are an AB student like me, it may help to know that EIGENbases and EIGENvalues are key concepts of linear algebra.

34D: Though they didn’t make it very far this year, in past years Duke has soared from ACC champion to March Madness winner.

As noted earlier, today’s theme may come across as more subtle to those like me who did not excel in the art studio. However, with a second glance at the beginning of the theme answers, one realizes that these are all different shades of blue. This is charmingly explained by Corless with the inclusion of BLUES CLUES as a revealer. The title “Old, New, Borrowed…” also hints at this same color that brides are arbitrarily advised to wear on their wedding day. I love the clever ways in which Corless alludes to blue and its various shades. I also appreciated her reference to my guilty pleasure, the Kardashian family, as well as a nod to adulthood with Roth IRA (of course I know what this means, Mom). Congratulations to Corless on a fabulous first puzzle!

Firstly, I want to give a huge thank you to Puzzles Editors Owen Travis and Gabe Robare for making this puzzles section possible! I especially want to thank Owen for his detailed feedback on the clues and grid entries.

After solving so many New York Times puzzles, creating my first one was an extremely exciting and rewarding process. While it was harder than I’d expected to put personal touches into the grid (other than my theme answers), I had a ton of fun clue-ing entries like SPORT and SPY to add in the things I love to the puzzle. I hope you all enjoy solving this puzzle as much as I enjoyed making it!

Play the Friday Crossword, ‘Get Cracking’ 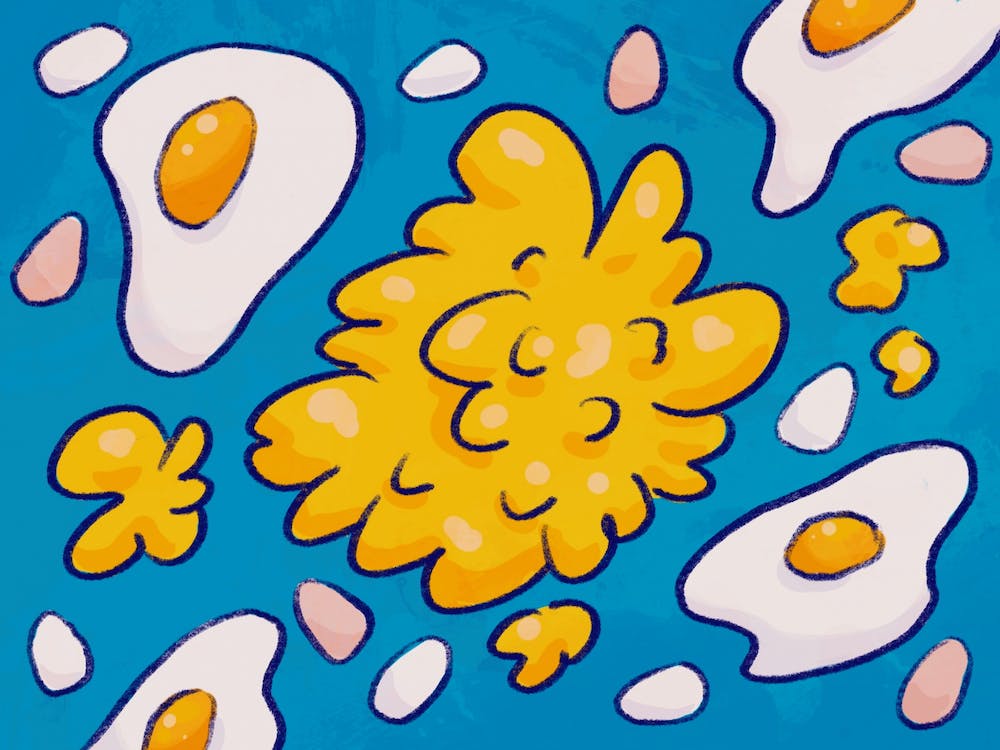 Play the Friday Crossword, ‘Get Cracking’

Spice things up and keep the pan hot with this week’s puzzle from Juliet Corless.

Spice things up and keep the pan hot with this week’s puzzle from Juliet Corless.