The orange, the black and the green: Sustainability at Princeton

On April 22, people around the world celebrated and recognized Earth Day, and this Saturday, Princeton’s green groups, students and community will gather on the Frist North Lawn for an Earth Day Picnic complete with student performances, free coffee cupcakes — and a chance to learn more about environmental and sustainability work at Princeton.

The Earth Day Picnic is important in raising widespread awareness and consciousness on campus; for many student leaders planning the event, however, environmental work on and off of campus extends far beyond a single day. The Office of Sustainability founded the GreenLeaders Consortium in 2006 to provide a space for sharing the plans and passions of various environmental groups on campus. In addition to collective efforts, Princeton green groups also pursue specific campaigns and approaches to sustainability on campus and within the University community. Street had the opportunity to speak with a few student leaders to hear about their groups’ work.

Students United for Responsible Global Environment (SURGE) was founded in 2006 and promotes a transition from environmental awareness to activism, focusing especially on policy and legislation related to sustainability. SURGE helped to coordinate student involvement in the massive People’s Climate March this past fall. The group also regularly runs campus campaigns like “Pull the Plug” and “Do It in the Dark,” as well as tabling and petition efforts throughout the year.

The “Do it in the Dark” campaign is an annual energy-saving competition among the residential colleges. The campaign is coordinated by SURGE in conjunction with the Office of Sustainability and Wattvision, a technology energy start-up founded by Savraj Singh ’03 in 2008. Wattvision offers live feedback on energy use, measured with a sensor connected to an electricity meter and wireless Internet. Using Wattvision technology, SURGE measured residential colleges’ energy use from March to April to establish an energy use baseline for each college. From April 8 to April 24, the colleges’ electricity consumption is recorded and compared to its baseline to determine which college achieves the largest usage reduction. Students can track hourly and daily usage as well as comparisons to the baseline by building and by college.

According to SURGE president Leigh Anne Schriever ’16, this year’s competition engages more with social media and live data. Students can use #pulightsout on Twitter and Instagram to be included in a raffle for a clap on/clap off light. The residential college with the greatest overall energy reduction against their own baseline will be announced at the Earth Day Picnic on Saturday and will receive their choice of a college-wide study break.

“There is a fair amount of consciousness on this campus about environmentalism but there isn't excitement about it, and that is what student groups really need to work on,” Schriever said.

Greening Princeton (GP), founded in 2003, specifically targets practices on campus to promote a better relationship between the University and the environment. One of GP's campaigns that came to fruition this fall was the campus-wide implementation of single-stream recycling. This allows all recyclable materials to be disposed of in the same bin rather than separated by material type, which simplifies the process and facilitates greater recycling participation.

Following this success, GP's focus this semester has shifted to preparing for the Earth Day Picnic and creating a strong foundation for the following school year. Co-presidents Susan Farrell ’17 and Zachariah DeGiulio ’18 hope for the group to address the sale of plastic water bottles in Frist, promote composting at all eating clubs and integrate sustainability practices into Frosh Week orientation.

“Students here are so involved and passionate about their causes, but sometimes it often feels there is a sense of apathy when it comes to climate change and environmental concerns on campus,” Farrell said. “But I do not believe it is for a lack of caring. It’s for a need to prioritize. I would love to try to raise the campus culture around sustainability and make that a point of community at Princeton.”

Greening Dining is working closely with Dining Services to promote more sustainable food practices on campus, in both individual and collective capacities. Greening Dining’s past campaigns have brought reusable food containers to Café Vivian (which is still currently an option) and worked with Dining Services to increase the use of local food and purchases from farms that use fewer pesticides.Greening Dining chair Réka Zempléni ’16 noted that Smitha Haneef, the new Head of Dining Services, has brought a number of changes to Princeton dining and has been open to conversation and collaboration with student groups.

“There are many vegetarian and vegan students on campus who find it hard to eat in the dining hall every night,” Zempléni said. “Imagine if you walk into the dining hall and all you can eat every night is peanut butter, bread or the same cold salad. We have been talking to Dining Services about this and things have been improving.”

In addition to dining hall food options, Greening Dining is also targeting food waste in the dining halls. The group’s primary focus is on student awareness and practices rather than changing the policies of Dining Services, as the latter has its own system for predicting accurate quantity production and food donation. Starting in May, Greening Dining will be running a pilot program where leftovers will be disposed in a clear container on top of a scale. When students dispose of their leftover food, they can see not only the total but also the impact of their own food waste.

Zempléni emphasized that this was not to suggest that there cannot be any food waste, but rather to encourage practices that minimize waste and raise consciousness of how much waste is produced by students at each meal.

Managing the Forbes College Garden, Forbes Greenhouse and Frist Garden is a year-round job. The main planting season occurs over the summer, with harvesting and planting happening in the fall, working in the greenhouse and managing two beds in the winter and transplanting in the spring. The garden provides a variety of vegetables, berries, herbs and flowers.

The Princeton Garden Project recently restructured its management for a more holistic approach that is modeled off the established garden program at Yale University. The project shifted to an application-based selection of five general managers rather than separate positions responsible for specific tasks such as planting and harvesting.

According to general manager Hannah Kraus ’17, the garden is looking to provide more produce for campus co-ops, build on their existing relationship with the Mathey Real Food Co-op, and partner with Forbes College on special nights like Vegetarian Nights.The group is also interested in providing independent students with an opportunity to buy sustainable produce.

The student leaders noted a general awareness of environmental concerns on campus but reiterated that it does not always translate into action. The green groups want to raise that awareness through their various individual pursuits — but also in collaboration. Kraus is also the GreenLeader coordinator and serves as a liaison between the various group leaders and the Office of Sustainability. She noted that in addition to space for group leaders to communicate, she would like to develop an open forum for students who are interested in environmental issues but not actively involved with a group to share ideas.

Kraus has also been involved in the development of “Investigating an Ethical Approach to Sustainability at Princeton,” a cross-listed ENV/CHV class that will be offered next fall. Kraus and Jenna Spitzer ’17 proposed the class through the Princeton student-initiated courses program. They have worked with Semenov and Office of Sustainability Director Shana Weber, who will teach the course, to develop a curriculum that enables students to focus on the ethical frameworks surrounding environmental concerns at Princeton.

“We molded and tried to figure out how best to incorporate student input into the campus plan. What is really cool is that it is an environmental ethics course, which adds something unique to the current course offerings,” Kraus said.

The course will bring guest lecturers and University administrators and staff to report on the state of various sustainable spheres at Princeton. At the conclusion of the semester, the class will present the outcomes of their evaluations of priority areas and propose directions to the University Campus Planning committees. The goal is for the class to be offered every year, Kraus said.

The desire for conversation and dialogue between the student body and University administration is also evident in the Princeton Sustainable Investment Initiative (PSII). Led by undergraduate and graduate students, PSII calls for the formation of a committee of students, faculty and administrators to conduct research on how to make Princeton’s investment both sustainable and effective on returns. PSII originated from conversations surrounding divestment from specific certain harmful companies, but has taken a broader approach that aims to change the mentality and long-term framework of investment policy, rather than just specific investments.

“That shift happened last spring....A couple of drafts were written and this fall, after the climate march, was when we did the collective editing and started gathering signatures,” Schriever said.

The two-page proposal, drafted by 20 graduate and undergraduates students, has received 1,600 signatures. PSII’s next step will be determined based on the response of the Resource Committee as to whether the conversation will continue at a Trustee level.

The upcoming class, PSII, and the green groups’ campaigns are the products of students coming together to enact change and promote sustainability on Princeton’s campus, as well as with policies that have global effects. However, each is also the product of personal actions, and they have been made successful through the conscious investment of individuals.

“I strongly believe that in your everyday actions you should be mindful of [the impact of] what you are doing,” Zempléni said. “The small things do add up.”

Despite a pandemic, Princeton Birding Society spreads its wings 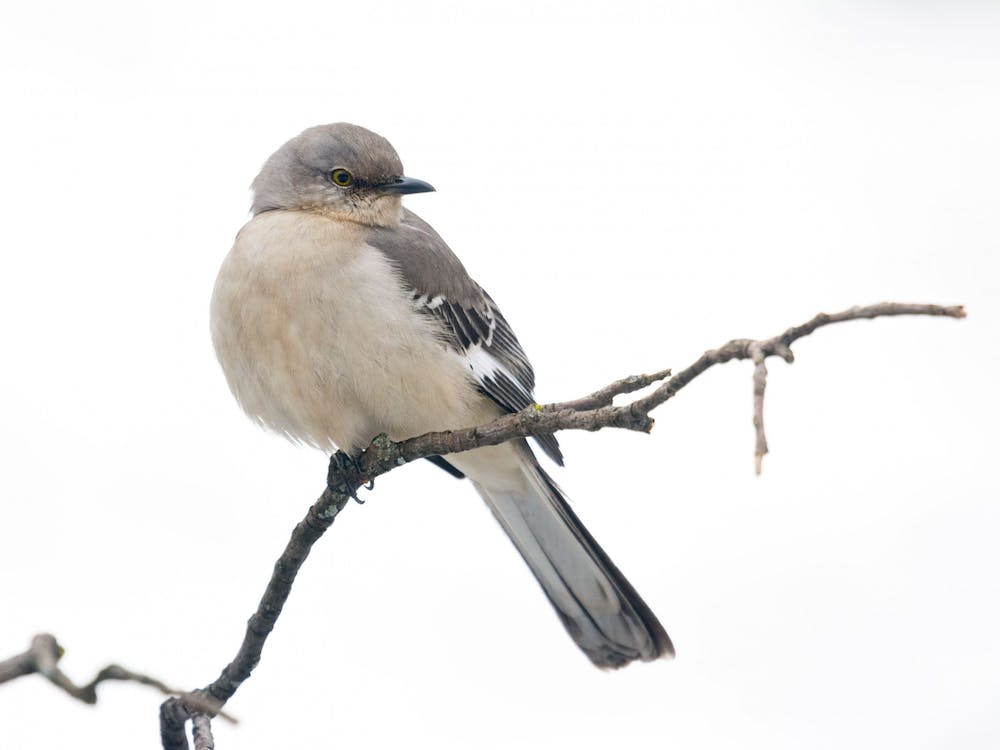 Despite a pandemic, Princeton Birding Society spreads its wings

This Earth Day, the ‘Prince’ sat down with members of the Princeton Birding Society, a group of students dedicated to ornithological education, conservation efforts, and the practice of birding. “Birding is a really unique intersection of what some might see as a hobby that's actually fueling really important discoveries about bird ecology and evolution,” said Cassie Stoddard, faculty advisor to PBS.

This Earth Day, the ‘Prince’ sat down with members of the Princeton Birding Society, a group of students dedicated to ornithological education, conservation efforts, and the practice of birding. “Birding is a really unique intersection of what some might see as a hobby that's actually fueling really important discoveries about bird ecology and evolution,” said Cassie Stoddard, faculty advisor to PBS.