“Show me what democracy looks like! This is what democracy looks like!” The chant rang out as a mob of orange- and black-clad Princeton students, faculty and community members joined the People’s Climate March in New York City last Sunday. Many held posters — both sponsored by the march's organizers and handmade signs — as they processed down 72ndStreet alongside other activist groups. The People’s Climate March drew over 400,000 participants and is the largest climate march to date, surpassing the Forward on Climate Rally held in Washington D.C. last February.

Individuals, groups and organizations from across the nation flocked to New York to take part in the collective demand for environmental action immediately before the commencement of the United Nations Climate Summit. The ideals behind the march’s slogan, “To change everything, we need everyone,” materialized in the event’s organization. Groups and individuals were offered the opportunity to join the march at theme-specific locations in an effort to weave together the diverse array of motivations and solutions that united the collective in the desire for global attention and action addressing climate change.

This diversity was reflected in the Princeton delegation as well. Shana Weber, the Director of the Office of Sustainability, estimates that over 300 Princeton-affiliated individuals gathered in New York at the march. An estimated 175 of these participants are current undergraduate and graduate students. Students United for a Responsible Global Environment and Princeton United Left took the lead on community and student involvement at the request of separate national organizations: the Sierra Club and 350.org. In early June, PUL began informing current members after being contacted by 350.org, a non-profit organization committed to galvanizing a climate movement to reduce the amount of carbon dioxide in the atmosphere. SURGE joined the movement through collaboration with its long-standing partner the Sierra Club, the nation’s largest grassroots environmental organization.

SURGE co-President Isaac Lederman ’15 had a central role in coordinating student involvement and publicizing the event to the Princeton community. Lederman has been involved with SURGE since his freshman year but his interest in the environmental activism dates back to an impactful viewing of “An Inconvenient Truth” in the seventh grade.

“SURGE is a very scrappy organization. Our membership that works on campaigns may not be the largest but through collaborations and alumni, we have been able to accomplish amazing things,” Lederman explained. “I cannot stress this enough the collaboration with other groups and between people, it is a group effort and group cause.”

SURGE was founded in 2008 to catalyze a transition from awareness to action and enact change in Princeton’s greenhouse gas emissions. SURGE has partnered with many outside organizations including the Sierra Club, 350.org and Oceana. The group also hosts a variety of panels and campus campaigns. One of the organization’s main focuses is the Princeton Sustainable Investment Initiative, an alternative to the current endowment investment strategy which prompts divestment from fossil fuel-related business.

Leigh Anne Schriever ’16, co-president of SURGE, is leading this initiative. Schriever was one of many Princeton marchers who were participating in a protest for the first time. She noted that she was impressed by the turnout, which reminded her that many people care about the environment who have not yet found engagement in groups like SURGE. The march was the first step forward in catalyzing support in campus activities. Collaboration on the Climate March has had immediate results with the addition of two new graduate chairs to SURGE leadership, Hessameddin Akhlaghpour GS and Alex Piet GS.

“We live in a relatively democratic society where the government does not throw you in jail for going to demonstrations and objecting to its policies. That might sound trivial, but it's not,” Akhlagpour said. “Not too many countries are like that around the world. I believe we must cherish this privilege by doing what we can to improve the situation here and around the world.”

SURGE offered subsidized train tickets through the Sierra Club and was awarded High Meadows Foundation funding from the Office of Sustainability to pay for three charter buses to transport students to the march. Lisa Nicolaison, Program Coordinator at the Office of Sustainability, served as an administrative contact for SURGE coordinating march attendance and participated by walking alongside other Princetonians.

“There was one moment during the march where Isaac Lederman was leading not just our group but many other groups in a chant. It was really great to see Princeton students leading in the streets,” Nicolaison said.

On the PUL front, Mason Herson-Hord ’15 and Dayton Martindale ’15 were involved in planning the local participation in the march over the summer and recruitment in the Princeton area. Princeton United Left is a student group that seeks to nurture a space to fight for equality and social justice. PUL has sponsored film screenings, facilitated participation in demonstrations like the XL Dissent protest in Washington, D.C. and led demonstrations in the Princeton area. PUL secured $1,000 from Princeton Progressives, an organization “operated exclusively for the promotion of social welfare,” to help cover transportation costs. Herson-Hord estimates that about 50 students attending the People’s Climate March were associated with PUL.

“I don’t like to frame issues like climate change as environmental issues as if that is something distinct or separate from all other problems or concerns facing humanity,” Herson-Hord said. “I usually treat climate change as a justice problem given that there is a particular set of humanity that is overwhelmingly responsible for the damage done, and there is an entirely different subset of humanity that bears most of the costs of that destruction. I think it is appropriate to label this as a form of violence.”

Martindale served as an area representative over the summer and attended meetings led by march organizers in Princeton and Philadelphia. He remarked that he was skeptical early in the summer, as the march did not have a specific goal. However, as the planning progressed, he saw through first-hand involvement that was not necessarily a detriment.

“The problem with climate change, and lots of issues, but especially climate change is that it often comes across as the scientific elite telling you what to do. I think it was valuable to not have it be a celebrity cause. It was a ground up — people got to say what they felt about it — which is a platform that in almost any issue doesn't often exist,” Martindale explained.

This particular platform, the march’s organization and the magnitude of the issue drew an expansive array of proposed solutions and “most important focuses.” Taimur Ahmad ’16, co-founder of the newly-created Princeton Wilderness Society, was motivated to attend the march by a general appreciation for the outdoors and the accompanying conviction that not taking action to protect the environment seemed hypocritical given the inevitable repercussions of climate change.

“I think the most interesting thing was the diversity of issues. It was a climate march but every delegation had a different spiel,” Ahmad said. “I was marching right next to hardcore vegans who were saying, ‘Veganism is one of the best tactics towards reducing the carbon footprint.’ Behind us were people for fair-farming practices, and way in the front were indigenous groups whose ways of life had been affected by climate change. More than race or class or gender, so many people have their own take on what we should do.”

Misha Semenov ’15, Greening Princeton co-president, had his own solution to present at the march. An architecture major with a strong interest in urban planning, Semenov said that he viewed cities as the best option in sustainable pursuits. He believes they already have the infrastructure for promoting energy saving practices like mass public transportation and already have efficient heating and cooling systems for larger buildings and centralized distribution centers. His focus is on creating “more walkable urban environments.” Semenov’s poster, which read, “Cities are the Solution,” garnered a large amount of attention from fellow demonstrators, whose reactions ranged from curious to adamantly opposed.

Semenov attended the Forward for Climate Rally in 2013 and was impressed by the increased diversity of groups and individuals present at the People’s Climate March. However, he noted that though he knew other groups were present, the march’s structure of separation might have inhibited discussion between these delegations. From the Princeton contingent, Semenov expressed a desire for greater involvement from students and groups across the political spectrum in the movement.

“What I would like to see is more conservative environmentalists — not because I necessarily share those beliefs — but more in regards to caring about the earth and our impact on it,” Semenov added.“It is a thing that transcends political beliefs. Knowing how many Princetonians do lean towards the right, I would like to see more diversity in that sense.”

Unlike Herson-Hord and Martindale, Semenov’s primary focus does not lie with the total deconstruction of capitalism. While Semenov agreed that the current capitalist system is in need of reform, he was wary of the calls to dismantle capitalism present at the march.

“The thing that bothered me most about this climate march was this idea that we have to kill capitalism for anything to happen. I feel that sort of defeats the purpose because if it becomes a march about socialism or anarchy, which a lot of people were holding signs about. I don’t know how effective that is within the current political framework,” Semenov said. “I don’t plan on dismantling the capitalist system, although I would like it to change, but I do think we can change the way we plan our cities and the priorities we place.”

Herson-Hord does not see the barriers preventing the necessary urban reform and social change being overcome without significant changes to the way western society has traditionally functioned. Herson-Hord and Martindale attended the Flood Wall Street protest on Monday, which Herson-Hord described as “upping the ante.” He said that the internal dissents within the environmental justice community reflected protest as a part of the democratic process.

“I think that having that disagreement on the table is very important. I think that climate is the issue that is going to be the most effective in turning liberal progressives into radicals given that it is the perfect illustration of how the working of our economy is at war with life on earth itself,” Herson-Hord explained.

Regardless of reasoning, the Princeton students present at the march proved that the student body’s apathetic label is not an inevitability.

“The march reflected not only the breadth and depth of the environmental movement but also its unity in concern for the planet,” Lederman said. “Some people may disagree about solutions to this threat to our lives and livelihoods and the planet. But at the end of the day, we all want action on climate change, and we all know that world leaders received that message loud and clear on Sunday.” 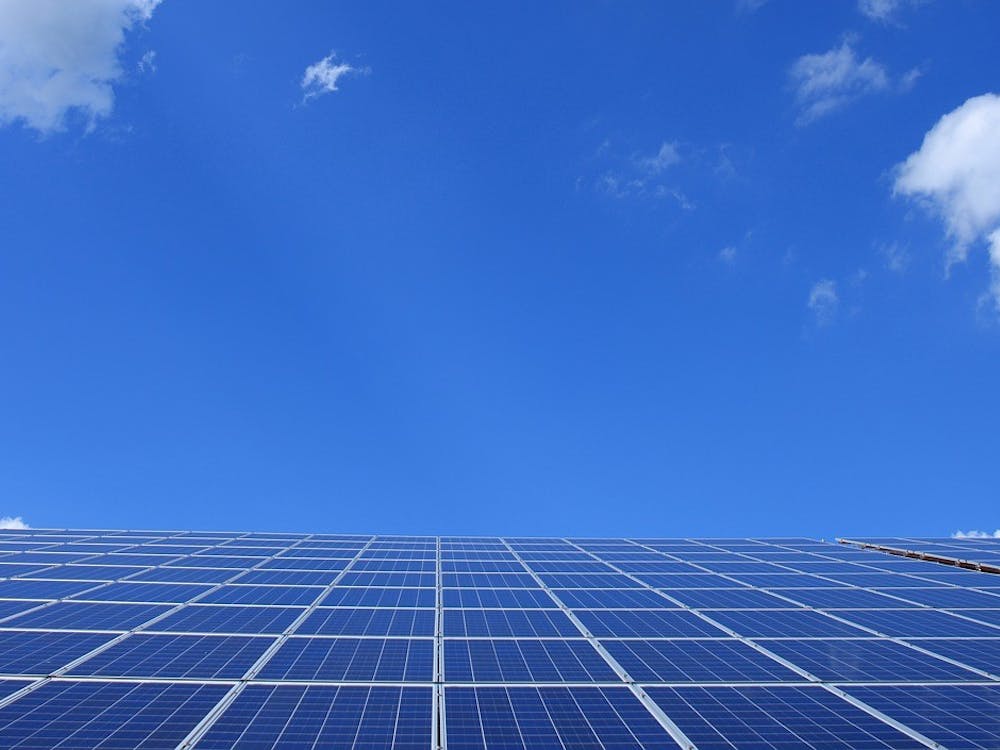 The solar arrays will “more than triple the University’s current solar photovoltaic (PV) generating capacity,” increasing this capacity from 5.5 to 19 percent of current electric energy use.

The solar arrays will “more than triple the University’s current solar photovoltaic (PV) generating capacity,” increasing this capacity from 5.5 to 19 percent of current electric energy use. 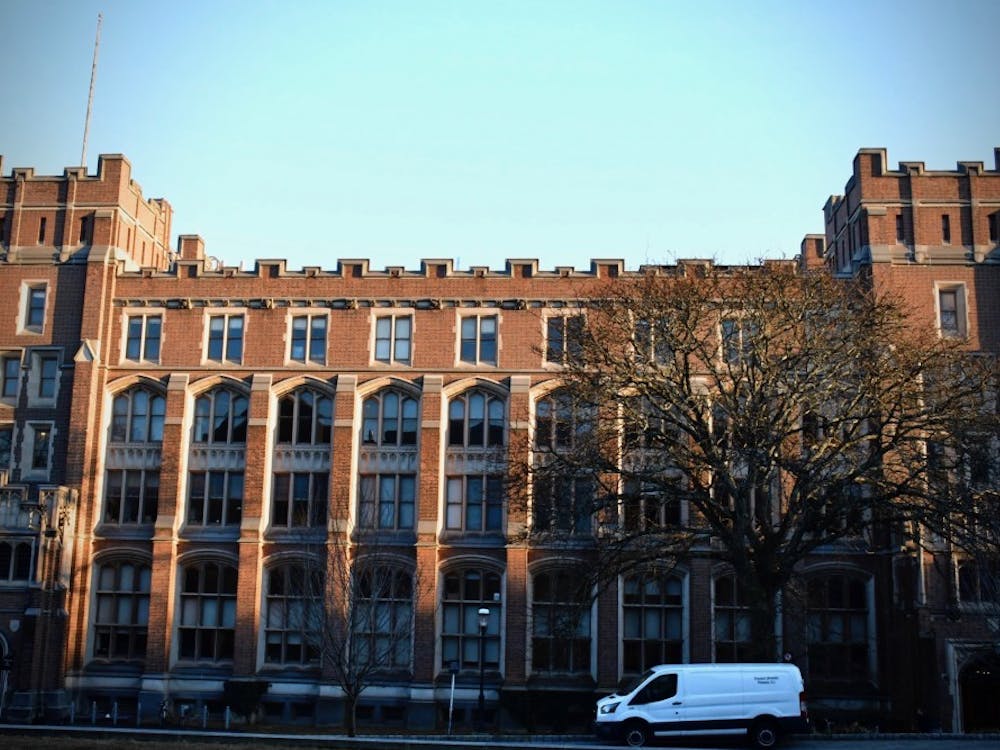